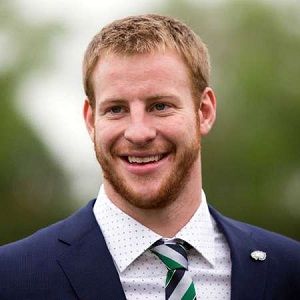 I'm one that doesn't let the pressure or any of the outside kind of scrutiny, all those things, really get to me.

I hate losing, and I'm gonna do whatever it takes to be the best at whatever it is I'm doing.

I view every day just as an opportunity.

Carson is in a relationship. His girlfriend’s name is Melissa Uhrich. They are having an affair since a very long time i.e., from their college days. They are college sweethearts and till date, they are together.

Both are spotted together in public places and hopefully, soon they will get married.

Who is Carson Wentz?

Carson Wentz is an American Brady Quinn who plays for the Philadelphia Eagles of the National Football League (NFL). He has been five times NCAA FCS national champion.

Carson was born on 30 December 1992 in Raleigh, North Carolina. His nationality is American and his ethnicity is North American.

His mother’s name is Cathy Domres and his father’s name is Doug Wentz who was a linebacker at Northern State during his college career. He has two siblings, both brothers, namely Zach and Luke.

He went to Century High School in Bismarck. From his school days, he was very much active in sports especially football and played as a quarterback and defensive back for the school’s football team.

For his higher education, he went to North Dakota State University in 2011 and graduated in the year 2015.

Carson Wentz started his career in sports while he was studying. He used to play for his college football team.  Carson attended North Dakota State in the year 2011. It was his first season playing for the North Dakota State Bison football. The Team won their first FCS title under ninth-year head coach Craig Bohl.

Carson Wentz played his first collegiate game on September 22. He was the backup quarterback to Brock Jensen. His team got victory over the  Prairie View A&M. He completed the 12-of-16 pass attempts for 144 passing yards and two touchdowns in the season. Carson appeared in the 11 games in the 2013 season.

Wentz team played against  Delaware State on October 13. Carson completed 10 of 13 attempted passes for 105 passing yards and a touchdown. Wentz completed 22-of-30 passes for 209 yards and a touchdown in the 2013 season. In the year 2014, he became the starting quarterback for his team Bison. His team had a victory over Iowa State in the Big 12 Conference. Wentz completed 18-of-28 pass attempts for 204 yards in a 34-14. His team won the match against Western Illinois on October 10. Wentz threw for 247 yards and five touchdowns while playing against Missouri State. Carson Wentz played his first national championship game on January 10, 2015. His team played the game against Illinois State.

Carson Wentz and his team played against Northern Iowa on October 10. Carson passed for 335 yards in the game. Carson Wentz suffered a broken wrist while playing against South Dakota. Wentz managed to complete the following game. He had 16-of-28 completions, 195 passing yards, and two touchdown passes. But the Bison lost 24-21.  Carson missed the next eight weeks of the season due to his injury. Carson returned to the practice in December. Bison won its fifth straight FCS title on January 9, 2016, on his led. Later Carson was named NCAA Division I-AA Championship Game Most Outstanding Player for the second straight year.

Carson Wentz played the  2016 Reese’s Senior Bowl on January 30, 2016. He completed 6 of 10 pass attempts for 50 yards. The Philadelphia Eagles selected Wentz On April 28, 2016, in the 2016 NFL Draft. Carson Wentz signed a four-year deal worth $26.67 million. He was also featured a $17.6 million signing bonus. Wentz suffered a rib injury during the first preseason game of 2016. But later he was fully healthy for the 2016 regular season. Carson started his first regular-season playing against Cleveland Browns on September 11. He had 278 passing yards and 2 touchdowns in the game. The team had a victory of 29-10 against the Cleveland Browns. Carson was named  Pepsi NFL Rookie of the Week for Week 1. Besides these, his team won the game against Chicago Bears in Week 2 with 29-14. Carson Wentz completed 301 passing yards and 2 touchdowns while playing against Pittsburgh Steelers during week 3. For his performance against the Steelers, Carson was named the NFC Offensive Player of the Week.

Carson Wentz: Salary and Net Worth

He has not been involved in any notable controversies in his career. Furthermore, there are no rumors concerning him at present.

Carson has the height of 6 feet 5 inches. His body weighs 108kg. Besides these, he has brown hair and blue eyes. Furthermore, there are no details about his body measurements.