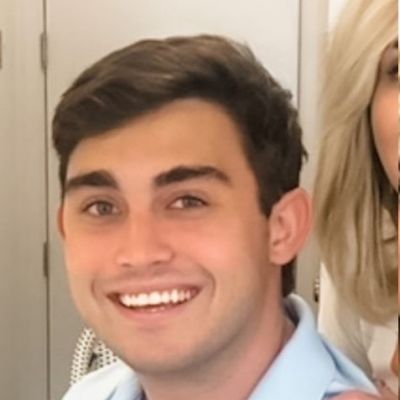 Who are the parents of Carter Belfort?

Carter Belfort is single as there is not any info available on his relationships and affairs.

His father, Jordan Belfort married his mother, Nadine Caridi in 1991.

Together, they are parents to two children named, Carter Belfort and Chandler Belfort. Though, in 2005 they ended their marriage relationship due to personal issues.

Who is Carter Belfort?

Carter Belfort is an American Kid Star. He is best known to be the son of Jordan Belfort along with his second wife, Nadine Caridi.

Jordan Belfort is an American author, entrepreneur, and motivational speaker. He is popular for the memoir The Wolf of Wall Street which was later adapted into a film with the same name.

Carter Belfort was born in New York City on August 15, 1995. Belfort is 27 years old as of 2022 and holds American honorary citizenship. He maintains Caucasian ethnicity while his birth zodiac sign is Leo as per the astrological chart.

In addition, he was born to his father, Jordan Belfort, and his mother, Nadine Caridi.

His father, Jordan Belfort is an American author, entrepreneur, and motivational speaker while his mother, Nadine Caridi is a British actress and model.

He was brought up with a sister named, Chandler Belfort who completed her studies at NYU Steinhardt School of Culture, Education and Human Development.

Talking about his academics, he is a graduate of Los Angeles Film School regarding his LinkedIn profile.

The professional life of Carter Belfort is not clear. However, he is popular for being the son of his father, Jordan Belfort.

From a very young age, Jordan Belfort was blessed with the talent of a good salesman. In the ’80s, he operated a seafood and meat business but it had to be closed because the company lost money.

Later, in 1987, he started selling stocks. When Jordan commenced his work in a brokerage firm, he put his selling expertise to use in a different field altogether. Belfort learned the intricacies of being a stockbroker.

Jordan started running his own investment company called Stratton Oakmont. In 1992, The United States Securities and Exchange Commission claimed that the company had been manipulating stock prices and defrauding investors. Later, this entrepreneur was out of his scheming brokerage business.

Belfort gives credit to his friend Tommy Chong for his present career as a motivational writer and speaker as Tommy encouraged him to pen down his experiences as a stockbroker.

He is known as the finest motivational speaker and popular for his writings that get featured in several major magazines and newspapers worldwide.

This author conducts seminars in different parts of the world and is also been serving as a consultant in over 50 public companies.

The newspapers and magazines that featured Belfort’s column are ‘The New York Times, ‘The London Times’, ‘The Herald Tribune’, ‘Forbes’ and ‘Business Week’.

As the professional life of Carter Belfort is not clear, it is not possible to calculate his net worth.

However, the net worth of his father Jordan Belfort is estimated to be around 100 million USD. But, his salary/monthly earnings have not been revealed.

Carter Belfort has a fresh career so, to date, he has maintained his dignity as a son of Jordan Belfort and has worked alongside his father on several projects.

Thus, he hasn’t been surrounded by any sorts of rumors and scandals.

The body measurements of Carter Belfort including his height, weight, and other sizes are not available at the moment.

Adding more, he has a fair complexion, along with brown eyes and hair of the same color.