Updated On December 18, 2022 | Published By: Gillian
Share this
In Relation 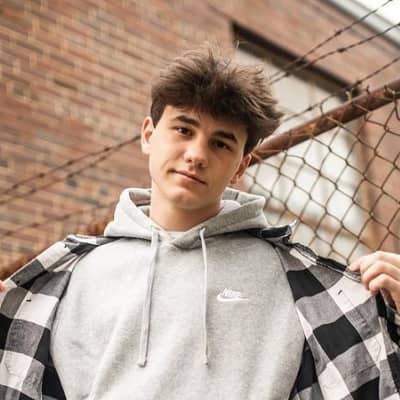 Relationship with his girlfriend

Carter Gallo is in a relationship with Sarah Grimm, a social media celebrity. They have not revealed the date of their first date. They attended the same university and posted several images of themselves together. Gallo and Sarah have both shared prom images on their Instagram accounts. According to the photographs he has put on his Instagram, he is madly in love with her.

Who is Carter Gallo?

Carter Gallo is a well-known growing Instagram, Tiktok, YouTuber, and social media influencer on multiple platforms. He has earned popularity and followers through his lip-syncs to popular songs and voice-overs for short amusing videos that he posts to his TikTok account.

Carter Gallo also signed a management contract with TalentXEntertainment in 2020, which comprises a lot of prominent social media stars such as Tal Fishman, Chris Daniels, and many more. He is also a YouTuber with thousands of fans.

Carter Gallo was born on February 24, 2004, in Richmond, Virginia, and has American nationality. He is of Caucasian ethnicity and adheres to the Christian faith.

In terms of his family background, Gallo hasn’t spoken much, although his mother’s name is Michelle, and her occupation is unknown.

He and his family moved to North Carolina when he was four years old. He had a strong desire to play football since he was a child. Gallo also did not discuss his early memories.

Carter Gallo went to Charlotte Country Day School, which is located in Charlotte, North Carolina. Gallo also attended the University of Tennessee, where Gallo graduated and published images on Instagram. He also actively played lacrosse and football for his school. He has also competed in the pole vault, representing his school’s track squad.

Carter began his social media career in late 2019 with TikTok. His lip-syncing, dancing, and humor videos immediately captured the attention of netizens, and he had 200 thousand followers within 2.5 months. To date, his TikTok account has received over 64.3 million likes and over 1.2M fans.

He is already a “crowned muser,” with a badge for being a top TikTok comic. Fans particularly enjoy his amusing point-of-view (POV) videos. His lovely grin and attractive, boyish good features have gained him a large female fan base on social media. He signed with the Los Angeles-based entertainment agency TalentX Entertainment in 2020. Many of Carter’s videos use music by Oakland-based freestyle rapper Haiti Babii.

Carter enjoys modeling as well despite the fact that his Instagram account has relatively few photographs, he is seen posing fairly easily in all of them. With only 24 posts, his platform account, @cartergallo, has amassed over 80.6k followers.

He may be seen posing on Folly Beach in an Instagram image dated July 2020. “What can I say, I’m a free spirit,” the caption says. Another photo from March 2020 shows him standing with his best friend at Lake Norman in Charlotte. In an April 2020 post, he is pictured posing with a toy “nerf pistol.”

In May 2020, he joined Twitter. His platform account, cartergallo1, has already amassed over 2121 followers. He may also be found on Snapchat with the handle carter gallo06. Carter Gallo has his own YouTube channel, Carter Gallo which he started the channel On July 9, 2020. Surprisingly, despite the lack of videos, the channel has amassed over 6.84k subscribers since its inception.

Carter Gallo, a popular Tiktok and Instagram celebrity, has not participated in any films or television shows, proving that he is not in the entertainment industry. This is why he has yet to receive or be nominated for any awards or distinctions.

In addition, he joined Twitter in May 2020 and has 2121 followers. Despite having a Twitter account @cartergallo1, Carter does not utilize it much. He also has a Twitch account, @cartergallx, where he has 808 followers. Carter is also a loyal and frequent user of TikTok @CarterGallo, where he has 1.2 million followers and 64.3 million likes. He also has a YouTube account, @CarterGallo, with 6.84k subscribers.

In terms of physique measures, he stands at 5 feet 10 inches tall and weighs 64 kilograms. The information about his physical measurements, such as his hips, waist, and chest size, is unclear. There is no information on his clothing or shoe size. In terms of appearance, he has a white complexion, light brown hair, and brown eyes.

Some of his detractors try to bring him down, but such criticism does not derail his career. He does not seek such unpleasant recognition, and he has never been involved in scandals or problems. He has always drawn a barrier between his business and personal life. That is how he has managed to juggle his two lives.

Carter Gallo the teenage TikTok celebrity has made a good livelihood off his fame on social media. As a result, his net worth is predicted to be about $1 million in 2022. His exact salary, however, has yet to be revealed. He also generates money via YouTube and a variety of marketing and advertising contracts. His TikTok account is his primary source of income. However, no information about his assets is accessible.