Cary Elwes is an English actor and writer.

Cary Elwes is a married person. He has been married to photographer Lisa Marie Kurbikoff since June 24, 2000. The pair met for the first time at a chili cook-off in Malibu, California in 1991 and soon began a romantic relationship together.

They engaged in Paris in December 1997. The couple welcomed a daughter named Dominique on April 24, 2007. 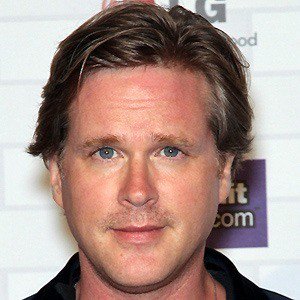 There's a shortage of perfects breasts in this world. It would be a pity to damage yours.

I'm still learning, and that's what life is about.

I do not envy the headache you will have when you awake. In the meantime, dream of large women. Dorian Harewood,

Who is Cary Elwes?

Cary Elwes is an English actor and writer who is best known for his roles as Westley in ‘The Princess Bride’.

Also, he is well recognized for his performances as Robin Hood in ‘Robin Hood: Men in Tights’ and Dr. Lawrence Gordon in ‘Saw’.

He was born on October 26, 1962, in Westminster, London, England. His birth name is Ivan Simon Cary Elwes and he is currently 59 years old.

His father’s name is Dominic Elwes(portrait painter) and his mother’s name is Tessa Kennedy(interior designer and socialite). He has got two older brothers: artist Damian Elwes and film producer Cassian Elwes.

His parents divorced when he was four years old and his father dies by suicide when Elwes was 12 years old.

After his parent’s divorce, his mother married Elliot Kastner and he has got Dillion Kastner and Milica Kastner as half-siblings.

During his teenager, she worked as a production assistant on the films ‘Absolution’, ‘Octopussy’, and ‘Superman’.

Cary holds British citizenship and his ethnicity is a mix of  English, Scottish, Irish, Ashkenazi Jewish, and Serbian.

He did his schooling from Harrow School and ten attended London Academy of Music and Dramatic Art. Cary made his way towards the US in 1981 and studied at Sarah Lawrence College in Bronxville, New York.

He studied acting with Al Pacino’s mentor, Charlie Laughton at both the Actors Studio and the Lee Strasberg Theatre and Film Institute.

Cary began his professional acting career in 1984 from the movie ‘Another Country’ in 1984 in which he portrayed the role of James Harcourt, a gay student.

He made his breakthrough with ‘The Princess Bride’ in which he played the character Westley/ Dread Pirate Roberts in 1987.

His recent film appearance as Frank Harper in ‘We Don’t Belong Here’ in 2017, Andy Warhol in ‘Billionaire Boys Club’ in n2017, and he will be appearing in ‘The Gettysburg Address’ in 2019.

Likewise, he was nominated for Golden Satellite Award in the category Best Performance by an Actor in a Supporting Role in a Series, Miniseries, or a Motion Picture Made for Television for ‘Uprising’ in 2002.

He has a height of 6 ft. 1 inch and weighs  76 kg. Also, Cary has grey eyes and brown hair. He has an attractive personality.

Apart from that, his shoe size, dress size, etc. are unknown.

Is Chad Johnson dating anyone at present? Know about his failed marriage, children, net worth, biography