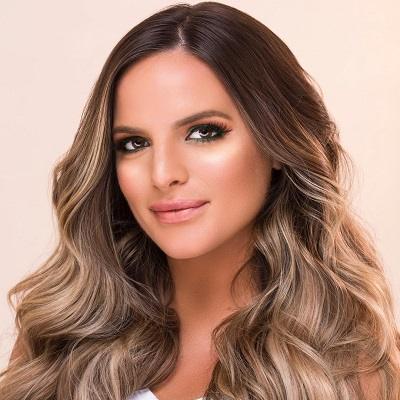 Casey Holmes is engaged to Davis Marlar. Her to be husband, Davis is a military man.

The couple first met in a bar in her hometown through her common friend. At the time, Davis’s first impression was that they are dating each other. However, the misunderstanding was cleared. Finally, they started hanging with each other. Finally, they were in love.

Together, they have a son, Mason. Currently, they are enjoying their life in the phase of parenthood.

Till the date, they have not revealed their married date.

Who is Casey Holmes?

American Casey Holmes is a YouTube personality and entrepreneur. Holmes is famous for YouTube fashion and makeup videos that went viral on the internet.

She is also the founder of the Women’s online Boutique.

Last, in 2016, she appeared in the family drama, Jessica Darling’s It List.

Casey Holmes was born on the 25th of November 1991 in Georgia, the United States. She is of Irish-Scottish ancestry.

About her family life, she has not uttered any words on the media and the Internet.

She has a self-titled YouTube channel. As of now, the channel has 1.77 million subscribers and 199 million followers and 750 videos. She created the channel on the 10th of March 2011.

She first uploaded her video on the 28th of January 2012 that includes her favorite make up tutorials. The video went instant viral with 52k views.

Following the videos, she started uploading other contents that include the hair care routine, foundation routine, and other makeup contents.

Such contents earned the attention of many viewers and her followers and viewers were on an increasing basis.

After the success of her first YouTube channel, she started another YouTube channel with the name, CaseyHolmesVlogs91. The channel is solely for vlogging purposes. Currently, the channel has 650k subscribers and 50 million views.

After a huge success as a YouTuber, she started her own online boutique. Through the boutique, she sells women’s clothing and other accessories.

Currently, the boutique is offering a military discount too.

Through her career as a YouTuber and entrepreneur, she has made a hasty net worth of $1 million. Through her Youtube channel, her earnings are in the range of $4.1k – $65.8k.

Also, she earns $2.1k – $33.5k yearly from her second YouTube Vlogging channel. Apart from that, she also earns through her Instagram posts which are in the range of 5 digits figures.

Besides that, she also earns through her online women’s clothing Boutique, Rosie Daze Boutique.

Being a social media influencer, she has gone through various appraisal and criticism.

In 2017, she had a hard time in her life. She left some of the clues about the event in the Snap Chat events. Following that, her following group and support on the YouTube channel’s comments. However, some people who are jealous of her popularity put some negative comments.

Finally, her life event took a turn for a good and got engaged with her boyfriend in a couple of months.

She has brown eyes with brunette hair. Her height is 5 feet and 4 inches and has a decent weight.