Casey Short is an August 23, 1990 born professional soccer player. She is a defender for Chicago Red Stars. Casey's relationship status is single. 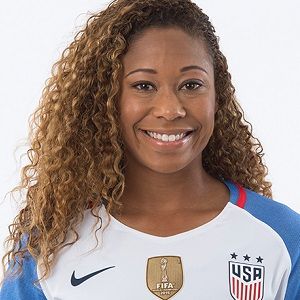 Casey Sort is an unmarried woman. Currently, she is totally focused on her career rather than stuck in any relationship stiff.  So far, she has not seen anyone and she never spoke about her personal life in the public and media.

Who is Casey Short?

Casey Short is an American soccer player. Currently, she plays for the Chicago Red Stars in the National Women’s Soccer League as a defender and represents the United States at the international level.

Previously, she has played with Boston Breakers and also with the Avaldsnes football club in Norway.

Casey was born on August 23, 1990, in Naperville, Illinois, the United States to African-American ancestry. She grew up in her hometown along with her parents. Her father’s name is Kerwin and her mother’s name is LeeShelle Short. From the beginning of her childhood, she had a keen interest in soccer.

Talking about her education, the American soccer star completed her graduation from Florida State University in Criminology. Later, she earned her master’s degree in Sports Management.

Casey Short began her career at Florida State Seminoles in 2008. During her four years in the team, she played in 81 matches and scored seven goals. Later in 2015, he signed with Avaldsnes Football Club.

In the 2015 season, she earned 27 caps for the team. Prior to Avaldsnes, Casey was selected by the Boston Breakers as the fifth overall pick in the 2013 NWSL College Draft. Due to her injury, she couldn’t manage to play a single match for the club.

In 2016, she moved to Chicago Red Stars and the whole season went pretty well. She netted three goals in 44 matches and started every match for the club.

As an international player, Casey has represented the United States every youth team such as U16, U17, U20, and U23. Talking about her senior career, she made her United States women’s national soccer team debut on October 19 against Switzerland. As of now, she has appeared in 18 matches for her national team.

So far, she has not won an individual award. Although, she was included as one of the Top 11 in the Norwegian Toppserien league at the 2015 NISO Awards.

Being a professional soccer player, Casey earns a decent amount of money from her profession. However, her salary is unknown whereas her net worth is estimated to be over $1 million.

As of now, there are not any drastic rumors regarding her personal and professional life. Moreover, she has never faced any controversy to date. It seems Casey has total focus on her work rather than stuck in any controversy.

Casey Short has a height of 5 ft 8 inches and her weight is unknown. Furthermore, she has beautiful brown eyes and brown hair.