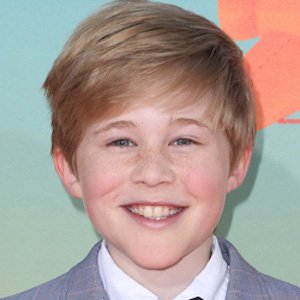 Who is Casey Simpson?

Casey Simpson is an American child actor and social media star. He is best known for playing the role as Ricky Harper on the hit Nickelodeon series Nicky, Ricky, Dicky & Dawn since 2014. She is also famous for providing additional voices in the American 3D computer-animated comedy film Despicable Me 2 (2013).

Casey Simpson was born on April 6, 2004, in Los Angeles, California, United States. His nationality is American and he is of North American ethnicity.

There is no information about his parents. He has an older sister named Sabrina Simpson, who has appeared in his YouTube videos. Casey was interested in acting since his early childhood age and he wants to become a full-time actor in his future.

Casey began his acting career appearing in several commercials when he was a small child. Since then, he has been featured in numerous commercials for several big and small brands. In 2013, he appeared in the American sitcom The Goldbergs. That same year, he provided additional voices in the American 3D computer-animated comedy film Despicable Me 2 (2013).  He rose to fame when he was cast for the role of Ricky Harper on the hit Nickelodeon series Nicky, Ricky, Dicky & Dawn in 2014. Since then, he has appeared as Ricky in 84 episodes of the series. Casey has a contract with the production until 2018. In 2017, he will be seen in the TV movie Escape from Mr. Lemoncello’s Library.

Besides acting, Simpson is a very popular social media star. He has over 189,000 subscribers on his self-titled YouTube channel. He has over 1.4 million followers on Instagram and over 5 million fans on the app musical.ly under the account Casey Simpson.

Casey Simpson: Salary and Net Worth

There is no information regarding his salary but his net worth is $210k. Seeing his performance in this field we can assume that he earns a good salary and net worth.

He has a good height of 4 feet 7 inches with a bodyweight of 42kg. His hair color is Strawberry blonde and his eye color is blue. His chest size is 34, his waist size is 28, his biceps size is 11 and his shoe size is 5 US.