Casey Wilson is an American actress, comedian, and screenwriter. She is best known for starring in Happy Endings, Gone Girl (2014), Bride Wars (2009), and Julie & Julia (2009). She is married to David Caspe. 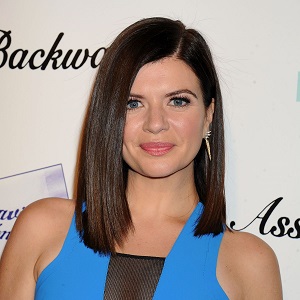 You only feel as good as your last sketch

When you're on a road trip, anything goes.

The ceremony was officiated by her brother Fletcher, who became a Universal Life minister for the event.

Wilson and Caspe had originally met in early 2010 when she auditioned for his ABC series Happy Endings, starting dating a year later in July 2011.

They got engaged over Labor Day weekend in September 2013.

Their first child, a son, Max Red Caspe, was born in May 2015. In 2017, this couple again welcomed their second child, Henry Bear Caspe.

Who is Casey Wilson?

Wilson was born as Cathryn Rose Wilson on October 24, 1980, in Alexandria, Virginia, US.

She was born to Kathy Wilson (née Higdon) & Paul Wilson. She was raised up in Alexandria, Virginia, along with her younger brother, Fletcher.

Her passion for performing began at an early age. When 9, her father built her a homemade stage in the backyard, where she put on plays with children from the neighborhood. From there, she started taking singing & acting lessons.

She also became heavily involved in her high school’s theater program, starring in (& occasionally directing) many of the school’s plays & musicals. Casey is of English, Irish and Italian heritage.

Wilson graduated from T. C. Williams High School in 1998. She studied theater at New York University’s Tisch School of the Arts and at the Stella Adler Studio of Acting. In the latter, she was a recipient of NYU’s “Excellence in Acting” award when graduating in 2002.

While studying acting at the Stella Adler School of Dramatic Arts, she had originally set out to be a dramatic actress, but later started to focus on comedy at the suggestion of an acting teacher.

At UCB, she was a member of the Harold improv teams. Among her best-known work at UCB, was the two-woman sketch show “Rode Hard and Put Away Wet” written & performed alongside her comedy partner & best friend June Diane Raphael.

They co-wrote their first screenplay for the comedy Bride Wars, in which they also appeared in supporting roles.

It was followed by landing a development deal with UPN in 2005 to create a half-hour comedy pilot & in 2007 they worked as writers & story editors on the Americanized version of Creature Comforts on CBS.

As a film actress, she made her debut as an acting student in the 2006 movie For Your Consideration. She has since appeared in films like Julie & Julia, C.O.G., The Breakup Girl, The Brothers Solomon, Freak Dance, The Great Buck Howard. Wilson also co-starred in Gone Girl, The Meddler, & Why Him?

From April 2011 to May 2013, Wilson starred as Penny Hartz in the ABC comedy series Happy Endings. A breakout role for Wilson, she was nominated twice for “Best Supporting Actress in a Comedy Series” at the Critics’ Choice Television Awards for her work on season 2 & 3.

She again collaborated with her husband David Caspe on the NBC sitcom Marry Me, which aired for 1 season from 2014-2015. Wilson also starred for 2 seasons on the Hulu original series The Hotwives.

Her other television credits include guest appearances on shows like Black-ish, How I Met Your Mother, Drunk History, Grey’s Anatomy, Kroll Show, Bored to Death, Comedy Bang! Bang! etc.

She has also done voiceover roles in the animated comedy programs American Dad! Animals, Glenn Martin, DDS, and The Life & Times of Tim. Wilson currently plays a recurring role in the series One Mississippi.

Club ranked Bitch Sesh among the best comedy podcasts of 2016.

There are no significant rumors and controversies regarding Casey in the mainstream media yet. She has thus far, managed to keep her image clean in the eyes of the general public.

Casey Wilson has a height of 5 feet 8 inches tall and weighs 68 kg. Her hair color is dark brown and her eye color is blue.

Robert Yancy, Son Of Singer Natalie Cole Died At The Young Age Of 39; Just After Less Than 2 Years Of His Mother’s Death