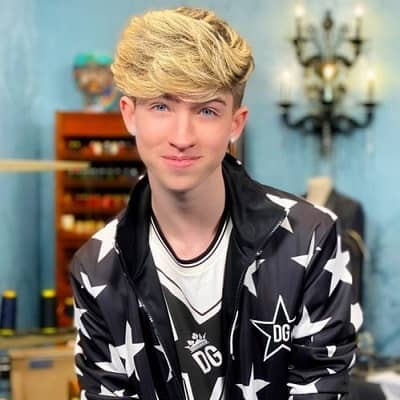 Cash Baker, a popular Tik Tok star, is straight and most likely in a relationship, according to his personal life. In late June 2020, he posted a photo of himself with a girl named Kate Marie with the caption “Meet my friend?? @katemaries_.” However, the comment was full of their friendship defining their relationship.

After a week, on July 4, he re-posted a photo of her with the caption, “What would be our ship name Kash or Cate???.” Though he has not confirmed their relationship status, they are most likely dating.

Furthermore, he is still in his adolescence and has not married. He used to frequently post on Instagram that he is looking for a girlfriend. He is still very young and has not witnessed any controversial acts.

Who is Cash Baker?

Cash Baker is a well-known American TikTok star and social media influencer. Cash Baker is a singer who has released music under the name Cash and Maverick, including “The Way You Move.”

Cash Baker is seventeen years old. He was born in the United States on March 5, 2003, under the astrological sign Pisces. Tara Baker is his mother’s name, and Rick Baker is his father’s.

Similarly, he was born in Tulsa, Oklahoma, in the United States, where he grew up with his elder siblings. He has two siblings: Lani Baker, his sister, and Maverick Baker, his brother.

Similarly, Cash is of American descent, and his ethnicity is being investigated. His faith is Christianity. In terms of education, he is a high school student.

Cash Baker is an American teen and internet media personality best known as a Tik Tok star. He rose to fame as a Tik Tok star after posting lip-sync and dubbed videos to his Tik Tok account. Maverick Baker, his brother, is also well-known on Tik Tok.

He and his siblings are frequently seen in Tik Tok videos. Lani Baker, his sister, is also an internet personality and model. And his brother has over 12 million Tik Tok followers. Many of his videos, as well as those of his sister and brother, take place outside, in places such as train yards or on beaches.

This talented Tiktok star posts interesting POV videos that have amassed a large fan base. He has a verified TikTok account with over 16.3 million followers and nearly 794 million total likes.

Aside from that, he is a motocross athlete who frequently rides in his videos. Following his success on TikTik platforms, he has amassed a large number of followers on photo-sharing platforms Instagram, where he currently has over 1.7 million followers.

However, on December 26, 2012, he and his brother launched a joint YouTube channel called ‘Cash And Maverick.’ They did, however, begin posting videos in 2018. On November 21, 2018, the YouTube channel debuted a video titled “The Way You Move.” This is his first single release as a musician.

They had posted a few videos on the channel and had already gained nearly 1.14 million subscribers.

Their third video on the channel, “Cash and Maverick – Whatever It Takes (Official Music Video),” has received over 400 million total views, making it their most-watched video to date.

Concerning Cash Baker’s hearing, the teen Tik Tok star has amassed a sizable fortune through social media platforms. He has, however, yet to pursue a professional career.

His growing celebrity could land him a lucrative job in the entertainment industry. His net worth is estimated to be around $0.5 million as of 2020. And, without a doubt, he is taking advantage of his good fortune at such a young age.

Similarly, he has 22.6K followers on Twitter and 16.5 million followers on TikTok, with nearly 819 million likes. In addition, his joint YouTube channel with his brothers Cash and Maverick has over 1.16 million subscribers.