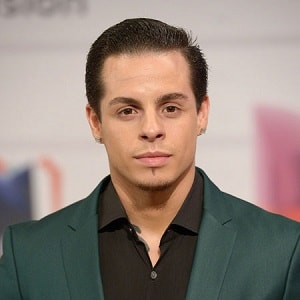 “Freshman year, I was 95 pounds and 4 feet 10 inches. So you can imagine what my football uniform looked like - my shoulder pads were bigger than my body!”

Casper Smart is currently in an affair with Paige Hathaway. She is a fitness model and entrepreneur. They have been dating since 2017. The couple met for the first time in Miami getaway. The couple revealed their relationship by posting their pictures on their Instagram handle.

Previously, he was dating Jennifer Lopez since 2011 but unfortunately, they couldn’t hold the relation and they announced their separation in August 2016.

Who is Casper Smart?

Casper Smart is an American actor, dancer, and well-established choreographer. He is best known for his appearance in the movies like ‘Honey 2’, ‘Step Up 3D’ and ‘Leave It on the Floor’. He had an affair with the Hollywood singer, actor, Jennifer Lopez from the year 2011 to 2016.

He was born on April 6, 1987, in Orange County, Anaheim, California, USA. His birth sign is Aries. His birth name is Beau Casper Smart. His father’s name is Roy Smart and his mother’s name is Shawna Lopez.

He had to spend his childhood with his grandmother because his parents divorced due to their internal conflict. Casper has 5 siblings, Bailey, Cory, Bree, Brandon, and Brooklyn. He holds American citizenship and his ethnicity is Hispanic.

There is no updated information available about his education and college life. It is under review. However, when he was in his high schooling, he loved playing saxophone – alto, tenor, and baritone.

When he became 18, he trained in dancing style, krumping. He also won a dance contest organized by the choreographer, Debbie Allen.

Smart’s first TV appearance was on the show, Ellen’s Even Bigger Really Big Show in the year 2008.

He debuted his acting career from the television shows called ‘Glee’ and later he made his appearance on ‘So You Think You Can Dance’ and ‘The X Factor’. Apart from that, he made his film career debut in the film ‘Step Up:3D’.

Casper has made his appearance in Tv shows and movies like ‘Restored Me’, ‘Perfect Match’, ‘Big Bang Theory’, etc.

He has been successful in making his dancing tour with famous personalities like J Lo, Flo Rida, Sean Paul, and many more.

Casper has not been successful in collecting awards in his name but he has been nominated for MTV Music Award for Best Choreography in 2013.

It is estimated that he has a net worth of around $1 million and his main source of earning is from his professional career.

There was a rumor about the marriage of Casper and his previous girlfriend Jennifer Lopez but it did not work and they separated in 2016.

He has a height of 5 ft. 8 inches and he weighs 83 kg. Casper has dark brown eyes and dark brown hair. He has tattoos all over his body. His chest, biceps, and waist sizes are 47, 17, and 36 inches respectively.