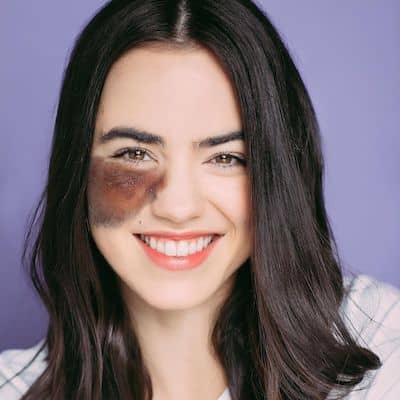 “I was teased when I was in elementary school. People always had questions, but I was pretty confident in my appearance.”

Cassandra Naud is a queer and her relationship status at present is possibly single. The details of her current or past girlfriend/affair are not revealed.

Who is Cassandra Naud?

Cassandra Naud is an American actress and dancer. The public noticed her for acting and her unique large birthmark which is under her right eye.

She appeared in projects like Loudermilk, Snowpiercer, See, and The Good Doctor.

This Loudermilk actress is keeping herself away from rumors and is also not surrounded by any desperate scandals.

But she is noticed for her mark on her face. The mark was with her since her birth and as doctors said it is a pigmented patch of skin. Her mom and dad refused to remove it due to the treatment risk.

Naud respected their decision and stuck with the idea of keeping the patched skin. However, she was bullied for her mark but she was confident in her appearance.

Lastly, her special birthmark became her feature and she was interviewed by People Magazine, Daily Mail, and Inside Edition.

She was born on 16 April 1992 in Canada. The name of her mother and her father is unknown.

Cassandra’s ancestry is Caucasian and has two brothers named Julien & Olivier plus a sister Victoria-Chloe.

Talking about her academics, she moved to New York and enrolled at the American Musical and Dramatic Academy.

From here she achieved a degree of Bachelors of Fine Arts.

Cassandra Naud started her acting career by appearing as a dancer in a short video Leona Lewis: Fire Under My Feet (2015). She then appeared in The Partitioned, Kokaholla Feat. Quinn Bates: High with Me, Hot Street, etc.

Her TV roles in The Good Doctor (2019) as Scrub Tech, Snowpiercer (2020) as Fiona, and Loudermilk (2020) Cappuccino are much appreciated by the viewers. Naud’s upcoming project Shelley or the Female Prometheus as The Dreadful Whiner is under post-production.

Her other screen credits are,

This actress founded a product named Luteal which helps people in managing their menstrual pain. She also helps queer and trans via innovative products, health literacy, and community advocacy.

At present, her net worth is estimated at around $100k US. However, her salary and other earnings are unknown.

Regarding Cassandra Naud’s body features, she has a large birthmark under her right eye which is quite visible. Her height is 5 ft 6 inches and her body weight is average.

Moreover, her eyes are brown, her curly hair is dark brown, and has a fair skin complexion.

Cassandra is available on social sites. Her Facebook and Twitter accounts have more than 47 and 7.7k followers respectively.

She is also on Instagram with more than 39.2k followers. Here she posts her modeling and lifestyle pictures which are loved by the viewers.