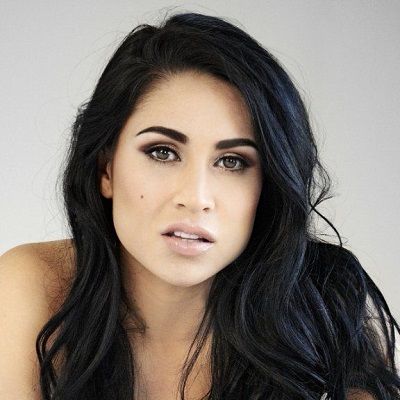 Cassie Steele is currently married to Trent Garrett. Trent is an American actor and model known for his role as Bowie Quinn in Andi Mack.

They married in November 2018. Trent has a son Luka who is the step-son of Cassie.

Who is Cassie Steele?

Cassie Steele is a Candian actress, singer, and songwriter. Cassie is best known for playing the role of Manny Santos in Degrassi: The Next Generation.

She is going to give the voice of Raya in The Raya and the Last Dragon. She has an album How Much for Happy.

Cassandra Rae “Cassie” Steele was born on 2nd December 1989 in Toronto, Ontario, Canada. She is the daughter of Robin Steele and Lily Steele. Her father is of British descent and mother is of Filipino descent.

Cassie has a younger sister, Alexandra Alexa Rose Steele. Alexandra is also an actress who co-starred Cassie by playing Angela Jeremiah on The N’s television show Degrassi: The Next Generation.

She started creating her own sings to go with her poetry when she was in first grade. After that, she began taking singing lessons. Likewise, Cassie attended the London School of Dance in Scarborough, Ontario.

Also, she is trained in ballet and jazz dance.

Cassie first made an appearance in 2001 Fib Finder commercial alongside Christine Rotenberg. In the year 2001, she appeared on an episode of Relic Hunter as the ten-year-old version of Sydney Fox.

When she was eleven years old, Cassie became the regular cast of Degrassi: The Next Generation. In the year 2011, she appeared in The L.A. Complex.

The estimated net worth of Cassie is $200 thousand US. As a Canadian actress, she has an average salary of $22,913 US.

She also earns from her YouTube channel where she has 6.12k subscribers.

Cassie has black hair and grey eyes. She is 5 feet 2 inches tall.

Cassie has around 139.7k followers on Facebook. She has around 280k followers on Instagram. She is following accounts of Rob Zangardi, Charlotte Hope, Austin Percario, Teresa Palmer, Jean-Paul Gaultier, Ilana Glazer, and others.