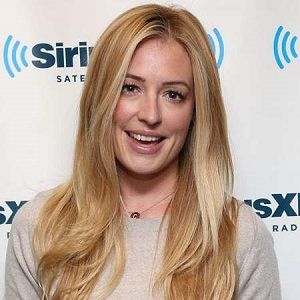 Cat Deeley is now married to Patrick Kielty. It has been 5 yrs since their marriage and they are still together. They were dating each other for 8 months as they met each other in Nov 2011. After 2 months of engagement, they married on 30th Sep 2012. She also has a son named Milo Kielty.

In 2011, Cat Deeley has been in relationships with Michael McMillian. Likewise, she was also in a relationship with Huey Morgan from 2000 to 2001.

Who is Cat Deeley?

Cat Deeley is an English television presenter, actress, singer, and model. Her real name is Catherine Elizabeth but is well known by Cat Deeley name. She is famous around the UK and the United States.

She has also won Favorite UK cable personality award as her performance in the Scorpio Multimedia Cable TV Award. Likewise, she also has been nominated for the four times for the Primetime Emmy Award. The model has hosted MTV, BAFTA, BBC and many other channels.

Cat Deeley was born on 23 October 1976 in Birmingham, England. Deeley was born at Sandwell General Hospital, West Bromwich, England and grew up in Sutton Coldfield and Great Barr.

Then she went to Dartmouth High School in Great Barr. Inthe school she used to play the clarinet in the Sandwell Youth Concert Band. She then joined the sixth form at Bishop Vesey’s Grammar School in Sutton Coldfield.

At the age of 14, she stepped into her career as she entered the BBC for clothes show. She got into modeling career at the age of sixteen and named herself as Cat.

Deeley was working as a modeling but she left modeling in1997. She later turned to MTV as co-presenter. She hosted one of the Saturday morning children’s programmes with Ant & Dec named SM: TV Life. And then she hosted other spin-off programmes CD: UK in1998to 2005 and also CD: UK Hotshots.

She was performing best and was awarded Children’s BAFTA award. In 2002, Deeley was seen in a television advert for Marks and Spencer. She also had hosted different others programmes including The Record of the Year, Fame Academy, The 2004 Brit Awards and Stars in Their Eyes.

She also as well as host the weekly broadcast on London’s Capital FM and BBC Choice series. In 2003, Deeley has also interviewed Kylie Minogue for a television off the concert, Money Can’t Buy. It was broadcast in the United Kingdom. In 2005 she was provided with more works to do and she played in an episode of Little Britain. Not only that she has built her career in acting. In one of the UK version film  “Loretta Geargrinder”, she has provided the voice also.

Her hosting career was more uplifting upward as she began hosting the second season of American reality show So You Think You Can Dance. Deeley was again seen in an interview with Kylie Minogue. It was another television special broadcasting in the United Kingdom on Sky One on 16 July 2006. Deeley was also seen as a guest reporter on NBC’s The Tonight Show. She there presented Fox’s New Year’s Eve Special from Times Square in 2006 and 2007.

On 1 July 2007, there was o concert performing as a tribute to the late Princess Diana, where Deeley was one of the presenters. The event was huge enough and was watched by more than 500 million people at the Wembley Stadium. In September 2007, Deeley was seen with Hamma & Glamma Productions for a music series named Soundtrack to My Life. It was produced by ITV London which works and is an influence of an eclectic band of musicians. In January 2006, Deeley was seen as a host in a show So You Think You Can Dance and in its auditions. She has always been the host of the show.

Deeley is also seen performing in various of the other projects including the third season of Soundtrack to My Life. She has also played as comedian host in Peter Kay’s Britain’s Got the Pop Factor. Likewise, in 2009, Deeley hosted the United States syndicated version of Who Wants to Be a Millionaire. Deeley again hosted the television version of the electronic game 20Q for GSN in the same year. In January and February 2010, Deeley hosted So You Think You Can Dance in the UK. Again in February 2010, Deeley was seen as the host on the morning TV show Today and again in morning talk show Live with Regis and Kelly.

On 9 January 2011, Deeley had a small guest appearance in the Disney Channel sitcom Shake It Up. In April 2011, Deeley presented an episode of CNN’s Icon. In the same month, she also contributes to the royal wedding network which was hosted by tabloid journalist Piers Morgan.

Deeley also appeared in Life’s Too Short and in the second episode of House of Lies as herself on 15 January 2012. On 26 January 2012, she was again seen co-hosting Live with Regis and Kelly with Kelly Ripa. On 14 March 2012, she appeared as a guest judge on America’s Next Top Model.

Then after Deely was continuously seen on the various big project the series Royally Mad for BBC America and also launch the show for ITV’s Soccer Aid appeal in 2011 and in 2012 continuously.

From 2014 to 2016, Deeley was busy appearing as a panelist on the game show named Celebrity Name Game which was hosted by Craig Ferguson. In 2017, Deeley played in Ant & Dec’s Saturday Night Takeaway.

On 31 May 2017, Deeley presented the game show named Big Star Little Star. The game was based on the British game show Big Star’s Little Star for USA Network. In October 2017, Deeley started to present in the talent contest Sing: Ultimate A Cappella for Sky One in the United Kingdom.

Deeley’s work is appreciated by all and she is also been awarded different awards.

In 2014 and 2012, she was awarded Critics’ Choice Television Award for Best Reality Show Host, So You Think You Can Dance. Again in 2004, She got Glamour Award for Theatre Actress. Likewise, she again received a Glamour Award for TV Personality in 2005, and  2004.

Cat Deeley: Salary and Net Worth

Cat Deeley is an English television presenter and model having the net worth of $18 million.

Deeley is running her professional and private life cautiously and she isn’t seen involved in any of the rumors.