Catalina Guirado is a British-New Zealander actress, reality TV star, model, and designer. She is married to Matt Cheadle. 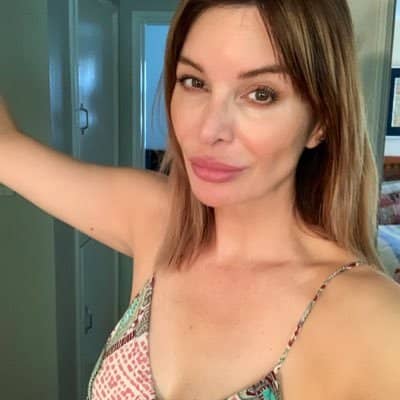 Catalina Guirado is married to i-94 band member Matt Cheadle. They tied a lifelong knot on 5th August 2007 in an inn in Cookham Dean, Berkshire. Their marriage was a headline in OK! magazine. The couple doesn’t have children.

Who is Catalina Guirado?

She is popular for her appearance as “Gorgeous Girl” on an Entertainment show, TFI Friday.

Catalina Guirado was born on 1 January 1974 in Auckland, New Zealand. As of 2021, She is 47 years old. Her full name is Catalina Jane Guirado.

She was born to Spanish artist father, Juan Antonio Guirado and English mother, Audrey Ballard. Unfortunately, her father Juan died in July 2010 because of lung cancer.

Likewise, she started to play the violin at age 7 and began to show her performances in Royal Albert Hall and the Royal Festival Hall at 12 years old. At the age of 15, she was already a capable, talented, and independent model. Moreover, she is an avid pet lover and owns a horse named Grace-Kelly.

She holds dual nationality in English and New Zealand. She is originally from New Zealand anyway. Her birth sign is Capricorn.

Talking about her education, she received a scholarship at the Guildhall School of Music and Drama.

Catalina started modeling at the age of 15 when she was scouted by Vogue. Since then, she has graced the covers of several magazines such as Elle, Cosmopolitan, FHM, Maxim, Loaded, and SKY Magazine. Moreover, she was named FHM’s 100 Sexiest Women.

She has walked on the runway for many top designers such as Vivienne Westwood, Michiko Koshino, Scott Henshall, and Rifat Ozbek. She also worked for the international advertising campaigns of companies including Dove, Wella, Toni & Guy, L’Oréal, and Lynx.

Guirado’s made her first appearance on television by appearing on the Entertainment show, TFI Friday as Chris Evans‘ sidekick, “Gorgeous Girl”. Following this, she has appeared on television shows like I’m a Celebrity, Get Me Out of Here!, Loose Lips, Bo’ Selecta!, This Morning, Stars in Their Eyes, Celebrities Under Pressure, GMTV, and Back to Reality.

Moreover, her notable films include Private Moments (2005), Blue Sombrero (2005), and Offending Angels. Since 2005, she hasn’t made a return to the film industry as she is currently a full-time artist and designer.

Speaking on her income, Catalina makes a decent sum of money through her successful acting career and modeling. She has not revealed anything about her earnings, assets value, and net worth. Likewise, Catalina is living a lavish lifestyle through her income.

Catalina is a pretty girl with great charm and personality. Similarly, she stands at a height of 5 feet 10 inches and weighs moderate. Her hair color is blonde and her eyes are dark brown. Moreover, she is praised for her charming personality.