Catalina has never talked anything about her love life. She is also never seen with any other on a romantic level.

And so we can say that she is single at the moment. 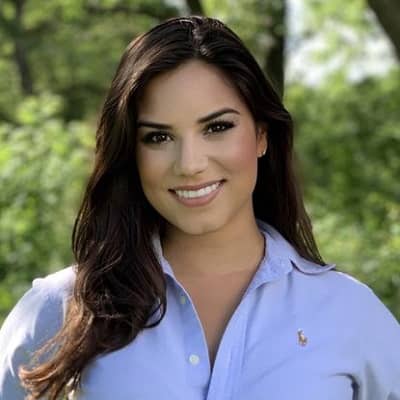 Who is Catalina Lauf?

Catalina Lauf is an American politician and had worked as an advisor at the Department of Commerce.

She was the youngest candidate for Illinois’ 14th Congressional District election in 2020. Moreover, she is a candidate for the General election for U.S. House Illinois District 16. It will be held on November 8, 2022.

Catalina was born on May 11th, 1993, in Woodstock, Illinois, USA. Her full name is Catalina Frances Lauf. She is of a Latin American ethnic group.

Her father Phillip Lauf is a businessman and as his a business in Chicago. Likely, her mother’s name is Luisa Lauf. She has worked as a cleaning lady and also as a nanny.

As of now, her mother worked as a public servant is a powerful advocate as well as a leader in the McHenry County community.

Talking more about her family, her mother and grandmother are legal immigrants from Guatemala. Her mother and her family have run off Guatemala’s political instability and civil war in the 1980s in pursuit of the American Dreaham.

Catalina earned an Associate’s Degree from McHenry County College. And then she receives a Bachelor’s Degree at the Miami University of Ohio.

After finishing her graduation, she started working in the ridesharing company Uber Technologies Inc.

And she was inspired to go into the public sector from President Trump’s historic 2016 campaign. Catalina worked as an advisor at the U.S. Department of Commerce.  She was appointed by President Donald Trump and has worked there since 2018.

Moreover, she was also a member of the Republican political party. In the year 2019, Catalina thanks President Trump’s Tax Cuts and Job’s Act and left the Administration. She joined her father’s business and worked for it.

Catalina also was one of the GOP candidates for the 14th Congressional District election in the 2020 race with the vision of prosperity. However, she lost the election receiving 10,451 votes against 52,093 votes. She was also part of the 2020 Republican National Convention.

Similarly, Catalina is a candidate for the General election for U.S. House Illinois District 16 which will be held on November 8, 2022.

Catalina must have earned good money from her political career. However, her earning details and net worth os still under review.

Her salary was said to be around $143,140 before. However, she now works in her dad’s business and must receive a high salary.

Catalina was among the news headlines when she stands as a candidate. However, there are no such rumors about her in the media.

Similarly, she also doesn’t involve in any such controversial activities.

Catalina has an average height of 5 ft and 6 inches. She weighs around 61 kg.

Talking about her appearance, the politician has dark brown hair and the same color eyes.

Moreover, she launched her Youtube channel on Aug 21, 2019, and has collected over 1.82K subscribers now.