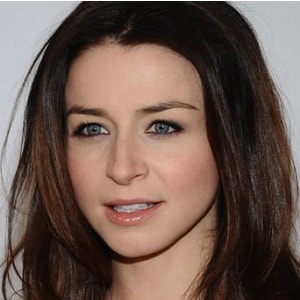 “I think that the female workforce is so valuable. And if we're going to champion women in the workforce, which our economy seems to want to do, we have to deal with the realities, which is that they have children, and they need a way to take care of their children in a supportive work environment.”

Caterina Scorsone is a married woman. She tied her knot with her longtime boyfriend, Rob Giles on June 27, 2009. They welcomed two daughters: Eliza on July 6, 2012, and Paloma Michaela on November 8, 2016.

Their third daughter was born in Dec 2019 and they named her Arwen Lucinda Jane.

However, this couple is now separated and has filed for divorce. Their split news came out in May 2020.

Who is Caterina Scorsone?

Caterina Scorsone is a Canadian actress and she is famous for her role as Amelia Shepherd in the ABC medical dramas ‘Private Practice’ and ‘Gray’s Anatomy’.

She portrayed the lead character in the Lifetime crime drama series ‘Missing’ from 2003 to 2006.

She was born in Toronto, Ontario, Canada, on October 16, 1981. Her birth name is Caterina Reminy Scorsone. Her father’s name is Antonio Bruno Scorsone and her mother’s name is Suzanne Rozell Scorsone.

Mr. Antonio is a social worker and Mrs. Suzanne is a social anthropologist. She has got four siblings. She holds Canadian citizenship and her ethnicity is half Italian.

She joined the Cardinal Carter Academy for the Arts in Toronto and starred in ‘Oklahoma!’ and several other productions. She attended alternative school Subway Academy II.

Later, she joined Trinity College in the University of Toronto, and majored in Literary Studies and minored in Philosophy. She finished her studies in 2005.

Caterina Scorsone made her first TV appearance as regular guest sports as a child on the Canadian children’s TV show ‘Mr. Dressup’ and played in ‘Peggy Delaney’ in 1998 where she portrayed the role of Amber, who comes from Vancouver to stay with her mom for a school term in Toronto.

Her breakthrough came after her leading role in the Lifetime crime drama series ‘1-800-Missing’ from 2003 to 2006. She portrayed the role of a young woman, Jess Mastriani. She starred as Alice Hamilton on the showcase TV miniseries ‘Alice’ in 2009, which was later broadcast on Syfy in America.

Caterina played the recurring role of Amelia Shepherd in the Shonda Rhimes’ drama series ‘Private Practice’ in 2010. She had been promoted to series regular for the series as of July 2010.

She also made her appearance in the third episode of the seventh season of ‘Grey’s Anatomy’. Caterina returned to the show after a three-year absence as a recurring guest star. She was promoted to series regular status for the show’s 11th season in June of the same year.

She won Prism Award for Female Performance in a Drama Series Multi-Episode Storyline for ‘Private Practice’ in 2012.

She has an estimated net worth of $2 million and her main source of income is from her professional career.

There is no rumor and controversy heard about her personal and professional life.

Caterina Scorsone has a height of 5 ft. 4 inches and she weighs 54 kg. Caterina has got dark brown hair and blue eyes. Her body measurement is 35-26-35 inches.

To know more about Lorne Michaels, Jonathan Scarfe, and Meghan Ory, please click on the link.