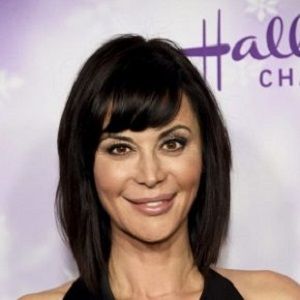 Not as much as I used to, but I use the Internet for everything. I use it for information. Like if I'm planning a trip or something, I'll check out the place I'm going to

Sometimes you work all the way through to 5am, then get a few hours and you're back on set again

I started when I was in college because I was shy and thought it would be a good way to break out of that.

What is the relationship of Catherine Bell?

Catherine Bell is in a relationship. She is dating her lesbian partner Brooke Daniells since 2012. She is a Scientologist, photographer, and party planner.

Bell was previously married to Adam Beason, a screenwriter. The couple first met each other on the set of the 1992 film Death Becomes Her.

This couple got married on May 8, 1994. They together have a daughter and a son named Gemma Beason and Ronan Beason respectively.

Who is Catherine Bell?

Catherine Bell is a British-born Iranian-American actress and producer.

Catherine is famous for her role as Lieutenant Colonel Sarah MacKenzie in the television series JAG which was aired from the year 1997 to 2005.

She is also popular for playing Denise Sherwood in the series Army Wives from 2007 to 2013.

How old is Catherine Bell?

She was born Catherine Lisa Bell on 14 August 1968, to Scottish and Persian ethnicity. She is 53 years old.

Catherine Bell experienced her childhood in London, England, UK. She is the daughter of Scotsman Peter Bell (father) and Iranian Mina Ezzati (mother). Her dad was an architect who signed a contract with an oil company in Iran.

Her parents divorced when she was two years old. After that, she moved to the US along with her Iranian mother, grandmother, and grandfather. Her mom is her personal assistant.

Since her childhood, she was into the buzz business and has done various advertisements.

Bell attended the University of California, Los Angeles (UCLA), where she considered a career in medicine and research. However, she dropped out to pursue her career in modeling.

After that, she studied acting at the Beverly Hills Playhouse with Milton Katselas.

After dropping out of the University, Catherine began her career as a model in Japan. Shortly, she returned to the United States and decided to try acting. She then worked as a massage therapist for a short period of time.

She made her acting debut playing a small role in the short-lived 1990 sitcom Sugar and Spice.

After that, she worked as Isabella Rossellini’s nude body double for the 1992 film Death Becomes Her. After that, she appeared in the Dolph Lundgren film Men of War in 1994.

From 1996 to 2006, she portrayed the lead character, Sarah MacKenzie in the TV series JAG.

In 2005, Catherine Bell played the character, Emily Patterson, in the film The Triangle. For her role in the movie, she was nominated for a Saturn Award for Best Supporting Actress on Television.

She recently appeared in roles in High-Rise Rescue, 12 Days, and Home for Christmas Day in 2017.

On April 2, 2019, CBS announced that she is reprising her JAG role of Sarah MacKenzie for a multi-episode arc in the tenth season of NCIS: Los Angeles.

In addition, she played the title character in The Good Witch’s Destiny (2013).

Did you Know the Marriage of Catherine Bell ended because she was a lesbian, Adam Beason?- Brooke Daniels —->>> Go through the Video<<<—-

This actress plus producer has made a net worth of $15 million. The average salary of an American actress is $56582.

Her love for jewelry is so much that she has her own jewelry line.

Is Catherine Bell involved in any rumors and controversies?

There was a rumor that Catherine did plastic surgery to change her appearance. Also, she divorced her husband because she was a lesbian.

Her eyes are brown and she has dark brown hair. Bell’s shoe size is 10 (US).

How much does Catherine bell earn?

How tall is actress Catherine bell?

Who are Catherine bell's Parents?