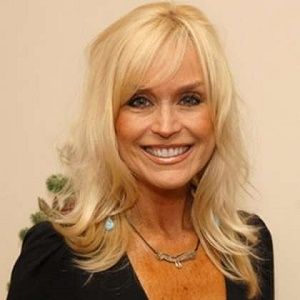 Catherine Hickland is a married woman. She is married to Todd Fisher. He is a producer. The couple tied the knot on 25th December 2012. They are residing in Las Vegas.

Previously, she has been married thrice. She was married to Richard Knowlton, her school sweetheart in the year 1978. Soon, the couple separated as her career was such that she was not able to give time for her relationship.

Later, she took the vows with David Hasselhoff in 1st March 1989 but they divorced due to irreconcilable differences.

After David, she found her new love in Michael E. Knight. She had an affair with him and later decided to get married to him. They married on June 27, 1992, and after fourteen years of married the couple divorced in 2006.

Who is Catherine Hickland?

Catherine Hickland is an American stage actress, television actress, author, and CEO of a cosmetics company. She is also a hypnotist. Her renowned movies are The Last Married Couple in America, The Bold and the Beautiful, etc.

Catherine was born on 11th February 1956, Fort Lauderdale, Florida, United States. Her ethnicity is unknown and nationality is American.
Her mother’s name is Mary K. Hickland, a dental ceramist and father’s name is Arthur W. Hickland, a dentist. She has two siblings, a brother, and a sister but their names are unknown.

Hickland attended Fort Lauderdale High School and graduated in the year 1974. Later she joined Florida Atlantic University but after two years she dropped out. She quit the University to take up a job as a flight attendant for National Airlines.
Soon after six months of the training, she was selected for the advertisement of the airlines. She then generated interest in acting and left the airline job to study acting. She moved to Los Angeles to pursue her career in acting.

Catherine started her career in acting by appearing in one of the episodes of the television series, Vega$ in 1978. In 1979, she starred in The Seeding of Sarah Burns and Eight Is Enough.

Movies and television series she was featured in 1980’s are Texas, CHiPs, Airwolf, Knight Rider, Capitol, The Bold and the Beautiful, Werewolf, The Last Married Couple in America, To Race the Wind, Robowar – Robot da guerra, Ghost Town, Witchery, and Taxi Killer.

Her movies in 1990s are Millions and Sweet Justice, while she played in the television series, Loving and The City and One Life to Live.

In 2001 and 2005, she was starred in the television series, Law & Order and Law & Order: Criminal Intent. She played the role of Millie Fresno in 2007 in the movie, Mattie Fresno and the Holoflux Universe.

Hickland’s net worth is estimated to be $20 million. He salary is unknown.

There are no rumors regarding her personal and professional life. It seems she is doing best job without harming others and has been a straight person in her life, for which she has not been in any controversy yet.

Catherine has a height of 5 feet 5 inches and her weight is unknown. Her hair color is blonde and eye color is hazel. Her shoe size and dress size is unknown.