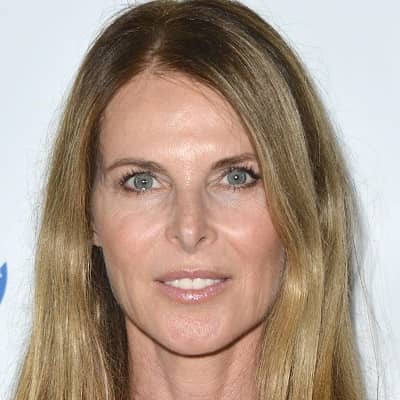 I'm lucky I don't have a [royal] title. Being a princess can work against her in an enormous way. A lot of people don't want a name, they want a face. If models are known too well, it detracts from the impetus of the product

Catherine Oxenberg’s current relationship is single after the divorce.

She was first married to a producer Robert Evans. They married on July 12, 1998, in Beverly Hills, California. But their marriage lasts only nine days.

Secondly, she married Casper Van Dien. They met the first time in the sets of the 1999 TV movie The Collectors. Catherine was 7 years older than Casper. The couple married at Graceland Wedding Chapel in Las Vegas, Nevada on May 8, 1999.

They later had an Indian ceremony under an Indian saint called Amma.  They renewed their vows presiding over the ceremony on the beach.

Catherine is also the mother of India Riven Oxenberg who was born in 1991. India was her first daughter. The father of India wasn’t publicly revealed until October 28, 2017. Later it was confirmed by convicted drug smuggler William Weitz Shaffer that it was his daughter.

She was romantically linked with John Kerry who was US secretary of state from 2013 to 2017.

In 1981, Catherine turned down an offer of marriage from her cousin Prince Andrew, second son of Queen Elizabeth II.

Who is Catherine Oxenberg?

Catherine Oxenberg is an American actress, author, and model. She is popular for playing the role as Amanda Carrington in Dynasty, 1980.

She is the eldest daughter of Princess Elizabeth of Yugoslavia and Howard Oxenberg. Her sister is Christina Oxenberg and her half brother is Nicholas Balfour.

Her father was a Jewish dress manufacturer. Catherine’s parents split up when she was six and divorced in 1969. Then her mother married the English banker Neil Balfour the same year.

And when she was sixteen, her mother and step-father get separated. Again Princess Elizabeth broke up with Burton and married thirdly Dr. Manuel Ulloa y Elias, a former prime minister of Peru.

In the meantime, Catherine moved back to the U.S and was studying. Her first acting coach was Richard Burton, who was engaged to her mother at the time.

Catherine is the first cousin of Prince Edward. Likely, she is the second cousin of the Prince of Wales and of Queen Sophie of Spain, and a third cousin of Felipe VI of Spain and Prince William, Duke of Cambridge.

Her maternal grandparents, Prince Paul was a Regent of Yugoslavia from 1934 to 1941, and her maternal grandmother is Princess Olga of Greece and Denmark. Catherine is also a great-great-great-granddaughter of Karageorge. She commenced the First Serbian Uprising facing the Ottoman Empire in 1804.

Catherine is descended from dozens of crowned heads, including kings and queens of Greece, Scandinavia, and England, and Russian Tsars. Indeed, her parents are said to have named their eldest daughter after her five-times-great-grandmother Catherine the Great, Empress of all the Russias.

Catherine has her further education from Harvard University studying psychology, philosophy, and mythology. Afterward, she got a transfer to Columbia University.

After moving to NYC, Catherine Oxenberg gets along with Stanley Zareff and was signed by Ford Models. She made her debut as an Ivy-educated model.

So her modeling career flourished and her face graced the covers of Cosmopolitan, Glamour, and also in various Interviews.

She made her acting debut playing Lady Diana Spencer in the 1982 TV movie The Romance of Charles and Diana. Catherine starred as the princess again for another TV movie Charles and Diana: Unhappily Ever After.

In 1984, Oxenberg joined the hit ABC prime time soap opera Dynasty as Amanda Carrington. She left Dynasty in 1986. She gains more popularity after playing in Dynasty. Oxenberg also was a guest host in an episode of Saturday Night Live, on May 10, 1986. LIkely in 1987, Oxenberg starred as Princess Elysa in the television film Roman Holiday.

Her other TV credits include Diana in The Lair of the White Worm in 1988, as Princess of Wales in the TV film Charles and Diana: Unhappily Ever After in 1992, telemovie Dynasty: The Making of a Guilty Pleasure (2005), Dynasty Reunion: Catfights & Caviar (2006).

She appears in various films such as Ken Russell’s cult classic Lair of the White Worm, The Omega Code, and Miracle of the Cards. From 1993 to 1994, she also appeared in the short-lived series Acapulco H.E.A.T. Further, she starred with Jon Voight in “Boys Will Be Boys,” “Arthur’s Quest,” “Time Served” “The Collectors” and “Catch Me If You Can” with Tim Matheson. and the surprise independent film. She appeared along with her husband in “The Omega Code,”.

In 2019, Catherine produced Escaping the NXIVM Cult: A Mother’s Fight to Save Her Daughter. Her daughter, Andrea Roth portrayed in it.

She has worked together with her husband on several different projects including a television series “I Married a Princess.” They also produced a production company, Holy Cow Entertainment.

She published her book “A Study Guide to Charlotte Bronte’s Jane Eyre” in August 2018. Catherine was a celebrity ambassador (with Van Dien) for the non-profit organization Childhelp.

Being one of the successful personality, her net worth is around $25 million.

Catherine Oxenberg stands with a height of 5 feet 5 inches weighing 55 kg. She has blonde hair and hazel colored eyes.

Also, get to know about Marja Allen, Anna-Louise Plowman, and Michelle Randolph.