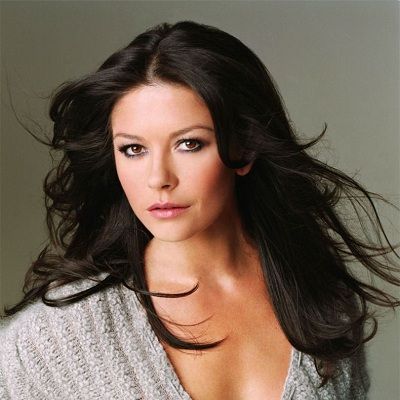 Words impress me. If a man can speak eloquently and beautifully to me, I just melt on the floor

I wish I was born in that era: dancing with Fred Astaire and Gene Kelly, going to work at the studio dressed in beautiful pants, headscarves, and sunglasses

Yes, I was in love with my husband at first sight and still am. We have the most solid relationship.

What is the relationship of Catherine Zeta-Jones?

Catherine Zeta-Jones dated several British celebrities, like John Leslie, David Essex, and Mick Hucknall during the 1990s. She was engaged with the Scottish actor Angus Macfadyen.

Zeta-Jones met the actor Michael Douglas at the Deauville Film Festival in France in 1998. At the time, Douglas was still married, and they dated in secret.

He and Zeta-Jones engaged at the end of 1999 after Douglas got divorced. On 18th November 2000, they were married in a high-profile ceremony in New York Plaza Hotel. Douglas and Zeta-Jones have two children together. They lived in Bermuda and later moved to New York until 2009.

In 2010, Douglas was diagnosed with tongue cancer, which triggered Zeta-Jones to fall in depression, and eventually was hospitalized for treatment. Following the stress of their health issues, Douglas and Zeta-Jones decided to live separately in 2013 but reunited in 2014.

At present, this couple is planning to celebrate their 20th anniversary.

Who is Catherine Zeta-Jones?

Catherine Zeta-Jones is a Welsh actress. Zeta-Jones aspired to be an actress from a young age. As a child, she played roles of the musicals Annie and Bugsy Malone in the West End productions.

She supports various charities and is an outstanding celebrity endorser of brands. Her struggle has been well documented by the media with depression and bipolar II disorder.

Catherine was born on 25 September 1969 in Swansea, Wales, UK. Her father’s name is David James Jones who is a Welsh philosopher. Catherine’s mother’s name is Patricia Fair.

She has an older brother, David, and a younger brother, Lyndon, who worked as a sales representative before operating into film production. She belongs to Welsh nationality.

There is no information about her mother and siblings.

Catherine was educated at the Dumbarton House School which is a private school in Swansea. She studied musical theatre at the Arts Educational Schools, London and made her stage breakthrough with a leading role in 1987.

There is no more information about her education, school/college university.

In 1990, Catherine Zeta-Jones made her screen debut, in the film 1001 Nights. From 1991 until 1993, her next on-screen appearance was in the British comedy-drama television series The Darling Buds of May, in which she starred.

Zeta-Jones was featured in the adventure film Christopher Columbus: The Discovery and in George Lucas television series The Young Indiana Jones Chronicles in 1992.

Over the next two years, Catherine starred in several British films that were mostly unsuccessful. In 1996, her first role in Hollywood was a superhero film The Phantom. In 1999, her next film role was in the heist film Entrapment. Later that year she arose in The Haunting and the High comedy Fidelity. Her most significant role was the action film Traffic in 2000.

In 2001, Catherine starred in the romantic comedy America’s Sweethearts. Zeta-Jones starred alongside Renee Zellweger in the musical Chicago in 2002. After her success in Chicago, Zeta-Jones has cast in certain other successful movies.

One of her most renowned performances from this time was in the 2004 film The Terminal, co-starring Tom Hanks.

Catherine Zeta-Jones starred in The Legend of Zorro, a sequel to The Mask of Zorro in 2005. In 2009, Zeta-Jones came back to stage in the musical A Little Night Music, marking her Broadway debut.

Furthermore, Catherine starring in the comedy Lay the Favorite took a three-year break from acting but came back to acting in 2012. In 2013, her performance did not receive good reviews but Zeta-Jones starred in the crime thriller Broken City. Her latest performances in the film Dad’s Army and television drama series Feud have been in 2016.

Catherine Zeta-Jones has a net worth of $150 million dollars as of 2022. There is no further information regarding her salary and income.

Up to now, she has maintained a good relationship with other people in his personal and professional life. Though she is popular, she has always stayed away from rumors and controversies.

Catherine Zeta-Jones is 5 ft. 7 in tall and weight of 62 kg. Her hair color is black and her eye color is Hazel.

Find Out How Celebrities are Celebrating This Year’s Thanksgiving Holiday!