Cathy Ang is in a dating relationship with Nikitas Kanellakopoulos. The couple seems to be comfortable with each other.

Moreover, she doesn’t reveal much abpuy6 her personal life to the public. 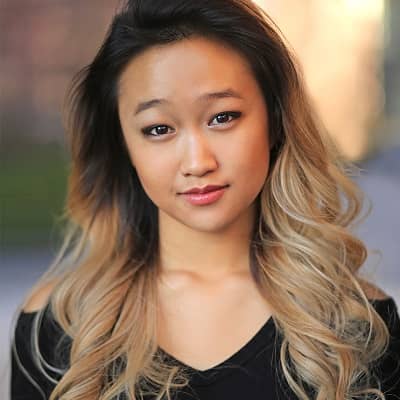 Who is Cathy Ang?

Cathy Ang is a Chinese Filipino voice actress and television actress best known for her acting role as Lily Goldenblatt in the miniseries, And Just Like That… Along with this, she has done many films such as “Ramy”, “Over the Moon” and “The Blessing” among the others.

Her parents, Robert and Grace Ang met at the University of Santo Tomas in the Philippines. Likewise, she has 2 older sisters, Stephanie and Kimberly Ang who were very supportive of her.

She grew up in Cupertino, California as her parents migrated to the USA before her birth.

Cathy is of American nationality and Chinese Filipino ethnicity. Furthermore, she was educated at NYU Steinhardt School of Culture, Education, and Human Development.

Cathy Ang got her first role in the 2018 short film Age of Sail when she had a brief role at that time. After that, she was seen in the TV series Dream Boy, Ramy, and I-ris in 2019.

Furthermore, she has done various TV series such as Flesh & Bone, The Blessing, And Just Like That.., and My Best Friend’s Exorcism among the others.

She has also appeared on shows such as Hollywood First Look Features and Made in Hollywood. Besides this, she has also given voice in the popular Over the Moon.

In the year 2021, she was nominated for HCA Award and LEJA Award for her excellent performance in Over the Moon.

Of all her brilliant and mind-blowing performances throughout her career, she has earned a hefty amount of money.

Similarly, she has an estimated net worth of around $1-5 million.

Cathy is not used to rumors and controversies because she has never faced any one of them.

Furthermore, she has a beautiful body shape.

Robin Bartlett
Tags : Actress And Just Like That… voice actress