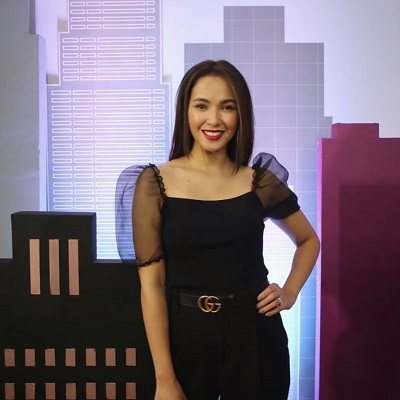 Less stress since we had a wedding planner.

We just did whatever we can, and before we know it, everything has already been accomplished.

The setup was a wonderful collaboration of Italian and Filipino talents and a beautifully romantic and intimate celebration of love in one of Italy’s most romantic settings.

Cathy Remperas is married to his long-term boyfriend, Edmar De Laua. They married on October 29, 2018, at the Makati Shangri-La. Also, they had their pre-wedding shoot in Tuscany, Italy.

Following that, they went to Eupour Tour for their Honeymoon. On YouTube, they shared some of their moments of the trip.

Philipo Cathy Remperas is an actress and TV personality. Remperas is renowned as Pauleen Dimagulangas of the TV series, Love Me Again.

Cathy Remperas was born on the 8th of October 1987 in Bohol, Philippines. She is of Philipo ancestry.

Despite she was born in Bohol, her native place is Zamboanga. She was destined to be at Bohol when she was searching for her father.

In 2008, she graduated as a registered nurse from Holy Name University.

Despite being a registered nurse, he pursued acting as a career. One year later, in 2009, she debuted in the movies with the romantic-drama movie, Nandito Ako… Nagmamahal sa ‘yo. In the movie, she portrayed the character of Jane.

In the same year, she appeared as a contestant for the reality show, Pinoy Big Brother: Double Up. The show first aired on the 4th of October 2009 and ran for 133 days. However, she managed to survive in the house for 112 days and became the 19th contestant to leave the show.

After the show, she became popular in a very short time span. Now, she started featuring TV series. In 2010, she debuted on the TV with the TV series, Isla portraying the character name Cathy. The same year, she was cast in Love Me Again as Pauleen. In the romantic series, she appeared in 29 episodes.

Now she became a regular face in the TV world. Some of her TV series along with the character name are-

Currently, she is expanding her career as a YouTuber too. On the 11th of October 2018, she created her channel. However, she uploaded her first content on the channel on the 12th of June 2019.

Till the date, she has uploaded 13 videos. On most of her videos, she is traveling.

The winning amount of the Pinoy Big Brother: Double Up that she participated is 1 million pesos that are equivalent to $19k USD. Also, the winner would get a home worth 2.5 pesos equivalent to 49k and a water refining station franchise and many more.

She also has a self-titled YouTube channel with 1.08k subscribers and 29k views.