Popular after the E! News and also ranked one of the top 10 up-and-coming broadcasters in entertainment. 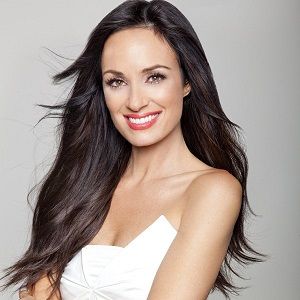 Catt Sadler was previously married to film producer Rhys David Thomas after dating him for several months. Initially, the couple met at a charity event in Los Angeles in May 2010. Later on October 23, 2011, Catt and Rhys tied their knot at the Palazzo Hotel in Las Vegas.

However, they couldn’t handle their relationship for too long and divorced in March 2016. Since their divorce, she has never seen with any man to date and been in any relationship. Currently, she is enjoying her single life and living elegantly.

Who is Catt Sadler?

Moreover, she got huge recognition after came to the E! News and also ranked one of the top 10 up-and-coming broadcasters in entertainment.

Catt was born on August 24, 1974, in Martinsville, Indiana, United States.

Talking about her early life, she grew up along with her three brothers and two sisters. She is an American by nationality and her ethnicity is unknown. From the beginning of her childhood, she had a keen interest in acting.

Concerning her education, Catt attended Martinsville High School. Later, she completed her graduation from Indiana University with a degree in journalism.

Catt began her career in acting at the age of 11 in which she appeared in the movie Hoosiers. Prior to finish her college, she got selected by WXIN, the Fox affiliate in Indianapolis.

During that time, she hosted the weekly segment “Youth Matters”. In 1997, she got a job as an entertainment reporter in San Francisco at KBWB/KNTV. Soon after that, she hosted a nightly lifestyle segment named “The Bay Beat” for four years.

Back in 2010, Catt began to host the extended hour-long E! News show along with Ryan Seacrest and Giuliana Rancic. Additionally, the popular host has also hosted several E! Live from the Red Carpet events such as Academy Awards, Golden Globes, Emmys, and few more.

Moreover, she also launched a new daytime talk show called Daily Pop. Despite being a long-term host of the channel, she left E! News after learning that her co-host Jason Kennedy was earning “double” her salary.

Being a famous host, Catt earns a healthy amount of money from her career. Currently, she has a net worth of $4 million.

In 2014, she got the nomination in the category Outstanding Entertainment News Program for Daytime Emmy.

So far, there are not any drastic rumors regarding her personal and professional life. Furthermore, she has never faced any controversy to date. It seems she has total focus on her work rather than stuck in any controversy.

Catt has a height of 5 ft 5 inches and weighs 51 kg. Furthermore, she has a beautiful pair of brown eyes and brown hair. In addition, her other body measurements include 33 inches bra, 25 inches waist, and 35 inches hips.

A Message To Catt!! Catt Sadler Got A Cute Small Note From A Young Girl Gender Pay Gap After Leaving E!