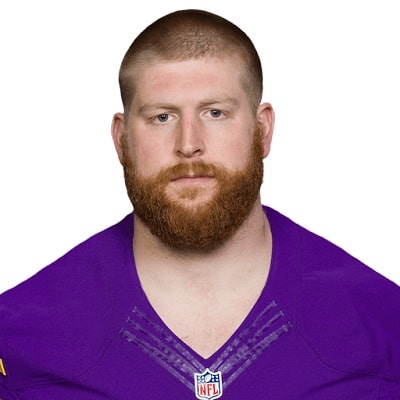 Cedrick Lang might be a married person. It is hard to predict because he has not disclosed anything about his relationship. According to some sources, it is known that he has a daughter who was born on July 29, 2015. He often shares precious moments with his daughter on social media.

Who is Cedrick Lang?

Cedrick Lang is an American football player who is currently signed into New England Patriots as Offensive tackle.

He was born on May 12, 1992, in Sioux Falls, South Dakota, United States. Cedrick was born to parents Rick Lang and Kay Lang. He has not provided information regarding his siblings and childhood.

Cedrick holds American citizenship but his ethnicity is unknown.

He joined the O’Gorman High School and joined The University of Texas at El Paso (UTEP) where he played basketball for the UTEP Miners for four years (2011-2015). After that, he switched to football as a tight end and played 12 games and caught 11 passes for 72 yards with one touchdown.

He began his professional football career in 2016 as he was chosen by New York Giants on May 6,  2016’s draft process and worked him out in Texas. He was released by the Giants at the end of training camp on May 9, 2016, and then he was then signed to Denver Broncos on Jan. 27, 2017.

However, Lang was soon released from Denver Broncos prior to the start of the regular season on Sep 02, 2017.

Unfortunately, he was injured in the lower leg and had to undergo surgery on 20 August 2018 and had to spend the entire 2018 season on the Minnesota injured reserve list.

However, Minnesota Vikings did not tender a qualifying offer to Cedrick Lang. Later, he was then signed into New England Patriots as Offensive tackle on Apr 01, 2019.

It seems Cedrick has not been awarded and nominated individually in his career till date.

On April 1, 2019, Lang is signed by the New England Patriots worth $500K which includes a $5k signing bonus. His net worth and income are under review.

Cedrick does not like to harm other persons and has not been involved in any rumors and controversies in his personal and professional life.

Cedrick Lang has a height of 6 ft. 9 inches and weighs 116 kg. He has blue eyes and brown hair. Other information regarding his shoe size, dress size, etc. are not available.