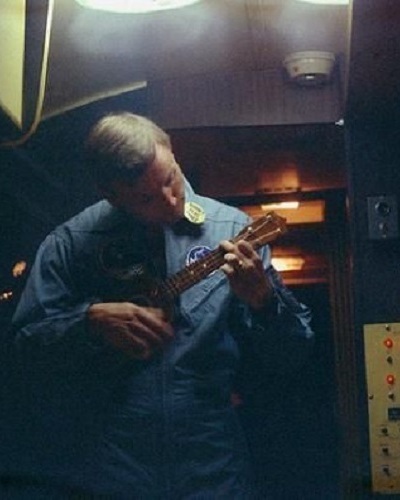 Dwayne ‘The Rock’ Johnson has such a rough image. Imagine him being in love with music and actually learning to play the tiny ukulele.

But yes, he has spent hours learning this new skill and can play some songs on it. He had played it during a scene in the 2012 film, Journey 2: The Mysterious Island.

Dwayne uses his thumb to strum the strings. He had said in an interview:

Canadian actor Ryan Gosling has deep roots in singing. He has not released much but often performs at jazz clubs. He can be seen strumming the ukulele in the film Blue Valentine in a dance scene.

American actress, model, and singer, Marilyn Monroe knows how to play this soft-stringed musical instrument. Here is her video of playing the ukulele in a film.

The gorgeous actress had strummed the instrument to a song in the film Some Like It Hot. This film was one of the greatest film comedies of all time. It was released in 1959 and at that time, Marilyn was nearing the end of her career.

She played the character of singer Sugar Kane and in one of the popular musical numbers, she energetically dances, strums the ukulele, and sings. Her skills with the small instrument reveal her mastery over it.

It sounds unbelievable but true! Yes, the astronaut who first landed on the moon, Neil Armstrong is good at playing the ukulele. Watch the video below and you will be surprised!

Neil had celebrated his and Apollo 11 return from the big mission on the Moon by playing the ukulele in the quarantine facility. He and his crewmates Michael Collins and Buzz Aldrin were isolated for a few weeks for observation after they came back.

Yes, American actor Tony Danza is good and skilled with the ukulele. On the Rosie Show, he had played the ukulele to a birthday song for the host. It is his hidden talent and has also played the jumping flea at Broadway. He was a former aspiring boxer but later took to acting as a career.

Click to read more about Niecy Nash, a lesbian comedian, and her surprise wedding with a partner, singer Jessica Betts!