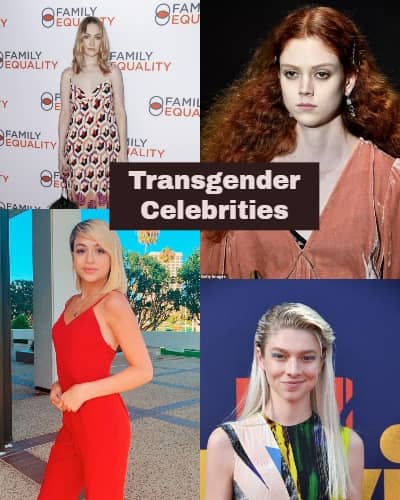 Like many other marginalized groups, trans people are only just beginning to appear in media in larger numbers. And thanks to trans actors and actresses who are finally getting noticed, more and more trans people can see themselves in the TV and movies they love. But it’s not all good news just yet.

These are some transgender celebrities who have spoken about their gender.

On December 1, 2020, the actor came out as transgender. Juno star Page has been a vocal advocate for the LGBTQ community.

He wrote on social media

“I feel lucky to be writing this, To be here. To have arrived at this place in my life. I feel overwhelming gratitude for the incredible people who have supported me along this journey. I can’t begin to express how remarkable it feels to finally love who I am enough to pursue my authentic self.”

“Brazil is a beautiful country, but it also hosts the highest number of violent crimes and murders against the trans community in the world — three times that of the US, Our options for growing up in a loving and accepting family, having a fruitful experience at school or finding dignified work are unimaginably limited and challenging. I recognize that I am one of the fortunate ones, and I intend to honor that as best I can.”

In 2019, this voice star revealed he was transgender, having transitioned decades ago before his career took off.

“The level of let’s be polite misunderstanding around trans issues is so profound and so destructive, When you disempower one population, you disempower everybody.”

The American Fashion model came out as transgender in March 2019 in CNN style. He claimed he began taking testosterone approximately six months ago and planned to get top surgery and return to fashion in the future.

“It feels like I’ve been wearing like a mask my whole life, I’m not wearing a skin that I don’t feel I am anymore.”

Alex is best known for his role in “Grey’s Anatomy” as an openly trans man.

In an interview with The Hollywood Reporter in 2018, Davis said the line was monumental for him.

“What’s cool about the show, the episode and Krista’s vision for this character is he’s about way more than being trans,” Davis said. “I cried at the table read, it was very moving for me. I’ve been waiting for a moment like this on TV my whole life. I am so honored I got to say that line on TV because it’s a long time coming.”

Jamie Clayton is known for her role as Nomi Marks on Netflix’s “Sense 8.”Outside of TV, Clayton has become an activist for trans rights, especially trans visibility in Hollywood.

Euphoria actor Hunter is a transgender. Her character is one of the only trans characters on TV that doesn’t struggle with her identity.

“There need to be more roles where trans people aren’t just dealing with being trans; they’re being trans while dealing with other issues, We’re so much more complex than just one identity.”

The Jessie actor announced that she was transgender and prefers she/her pronouns in 2018.

“This week, I’m going off to college. I’m also going to continue my acting career, and I am so excited to do both things as myself, I plan to play roles I haven’t had the opportunity to play. And I can only imagine how much more fun it’s going to be to play someone who shares my identity, rather than having to contort myself to play a boy. I’m going to gun for those roles, be it a transgender female or a cisgender female. Because it’s a clean slate and a new world.”

You may also like to read, Chinese Transgender Star Jin Xing Becomes The Ambassador For Luxurious Brand Dior!