The celebrity Agave plant of the Halifax Public Garden might flower this season! All are waiting with breaths held!

Updated On January 26, 2023 | Published By: shahid | In Interesting Facts , Wellness
Share this 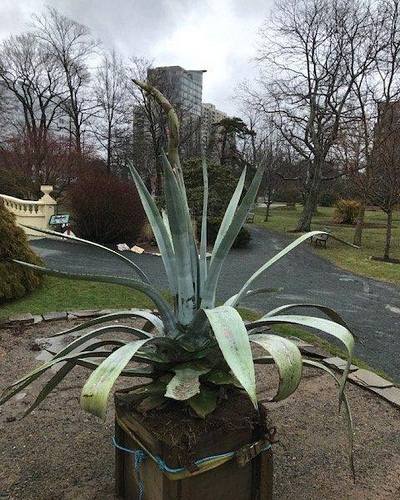 People in Halifax and beyond have gone crazy over this spiky plant. The plant is 4 decades old and it will flower only once which is likely to be this year. It will then spread its seeds and die.

No one even in the garden staff knows as to which country the plant came from and who donated it to the garden. It has outlived its normal lifespan of 25 years and the gardeners are unaware of what could be the reason for it.

This plant has shown an unexpected growth increase last month which set many hearts beating fast. It had now begun to shoot more than 15 centimeters a day raising the hope of the people of Halifax that it would bloom this year.

Shift out from the greenhouse

The growth of the celebrity agave plant was so much this year that it could not fit the greenhouse. It got entangled in the rafters of the greenhouse and needed to be shifted outside.

But then the agave plant requires a lot of heat; it is basically a tropical plant that grows in the arid areas of Mexico and South-Western America.

Hence the staff of the garden used special blankets and light to provide it with the much-needed heat for it to blossom. They hoped that it would continue to grow and flower in spite of the harsh Maritime weather of this time of the year around.

Social media and the agave plant

Margaret-Anne Bennett was the first to begin posting about this plant and its growth on social media. She wrote on the Facebook of the volunteer group Friends of the Public Gardens:

There was some slowing of its growth in between which was also captured and mentioned on social media by the plant lovers.

The news spread like fire on social media and now many locals visit the area daily to be able to catch the bloom in their eyes or their cameras. Tourists from the cruise ships also come to this garden to have a look at the plant.

“There’s not a minute when I can look out and not see people having their pictures taken.”

“I can see right now there are seven people down there. Teachers bring their classes.”

Margaret is lucky to be able to see the celebrity agave plant from her house as it is 14 stories above the garden.

Heidi Boutilier said that this winter there were some roots of the plant which were exposed and she was wondering what had acted as a trigger for it to reproduce.

“There’s not much you can do, though, when Mother Nature is in control.”

“It is such a large plant. And it is in its final chapter. To see it in your lifetime is pretty amazing.”