Updated On March 6, 2022 | In Child , Interesting Facts , Lifestyle
Share this 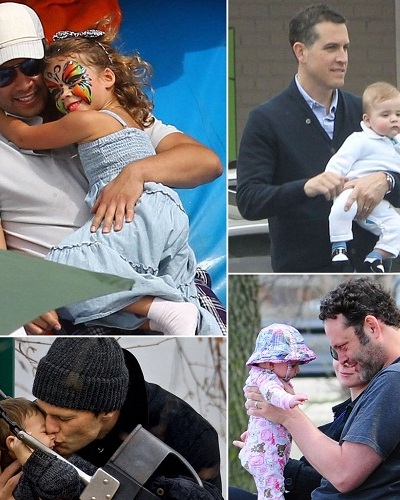 Fathers including celebrity dads have immense love for their children but by convention keep it private. The display of love for their kids in public is rarely noticed.

But with the advent of social media, there is a growing list of celebrities who do not fear expressing their fatherly love. The most recent addition to it is Dwayne Johnson ‘The Rock’ who has uploaded a cute little picture of his newborn daughter on his Instagram that has set his fans’ hearts to melt.

Let us know more about it and also about other dads whose display of their affection for their kids touches us all!

Skin to skin. Our mana. Blessed and proud to bring another strong girl into this world. Tiana Gia Johnson came into this world like a force of nature and Mama @laurenhashianofficial labored and delivered like a true rockstar. I was raised and surrounded by strong, loving women all my life, but after participating in baby Tia’s delivery, it’s hard to express the new level of love, respect and admiration I have for @laurenhashianofficial and all mamas and women out there. Word to the wise gentlemen, it’s critical to be by your lady’s head when she’s delivering, being as supportive as you can.. holding hands, holding legs, whatever you can do. But, if you really want to understand the single most powerful and primal moment life will ever offer – watch your child being born. Its a life changer and the respect and admiration you have for a woman, will forever be boundless. And to my third and youngest daughter, Tiana Gia – like I did when your two older sisters Simone Alexandra and Jasmine Lia were born, you have my word, I’ll love, protect, guide and make ya laugh for the rest of my life. Your crazy dad has many responsibilities and wears many hats in this big ol’ world, but being your dad will always be the one I’m most proud to wear. Oh and one more thing.. you’re gonna love rollin’ in daddy’s pick up truck. #TianaGiaJohnson? #3rdDaughter #BlessesAndGratefulMan #ImInTROUBLE

“Blessed and proud to bring another strong girl into this world,”

He has another daughter named Jasmine Lia, 2 with Lauren, and 16-year-old daughter Simone with his ex Dany Garcia.

He further thanked Lauren for this wonderful gift. He vowed to be the best dad and to be proud to be their dad.

These 2 angels… The greatest gift I've ever known. And, the reason I won't EVER STOP! Happy Fathers Day to all the Dads out there! Hope you are enjoying! #Howearlyistooearlyforafathersdaybeer

“On your first day of life, I promise to love you, to cherish you, and to provide you with a sandbox full of dreams to explore,”

He had two daughters with Jessica and they are a happy and blissful family.

Hayes Alba Warren: You sure know how to ring in the new year! You showed up a few days early but we couldn’t be any happier. Your Mamma is the strongest woman I know … you’re so lucky to have her by your side. You have two amazing sisters who already adore you and I know you’ll be thankful to have them guide the way. On your first day of life, I promise to love you, to cherish you, and to provide you with a sandbox full of dreams to explore. Welcome to the family my sweet baby Hayes! 12/31/2017

“Happy Birthday to our special little young lady …Such a special girl who brings so much joy and happiness into our lives.. Happy 6th birthday ( I can’t believe your 6 already ) have the most amazing day we love you pretty lady x ❤️ @brooklynbeckham @romeobeckham@cruzbeckham @victoriabeckham”

Happy Birthday to our special little young lady …Such a special girl who brings so much joy and happiness into our lives.. Happy 6th birthday ( I can't believe your 6 already ) have the most amazing day we love you pretty lady x ❤️ @brooklynbeckham @romeobeckham @cruzbeckham @victoriabeckham

God only knows what I’d be without you.

Jimmy Kimmel and Chris Hemsworth are other celebrities who often post inspiring pictures of their kids playing or enjoying with them.

Also read Top 10 richest Hollywood celebrity couples! How many children do they have?