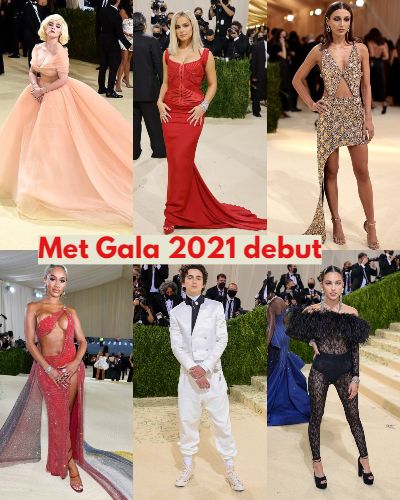 In the 2021 Met Gala, we could see various new celebrities from Emma Chamberlain, Lil Nas X to Addison Rae. Your favorite Timothee Chalamet and Billie Eilish graced the floor with their appearance. This year the theme was ‘American Independence’ and these are the celebrities who made their Met Gala debut.

Singer Olivia Rodrigo who is known for acting in High School Musical: The Musical: The Series won hearts with her song Drivers License in 2021. She attended her first Met Gala on 13th September in a daring yet classy outfit. She wore a sheer black lace bodysuit with an off-the-shoulder ruffle cut designed by Yves Saint Laurent. Talking about her outfit, she said,

“I personally love American punk music, and I think Saint Laurent does a really good job of making punk rock feminine. So that’s what I was going for tonight,”

Singer Billie Eilish made her Met Gala debut wearing a dramatic Oscar de la Renta gown. The fur-free dress made quite a legendary impression at the event. She convinced the house of Oscar de la Renta to go completely fur-free as she has been supporting animal rights.

Singer Lil Nas X has never disappointed his fans. On his first Met Gala appearance, he decided to go all out and chose to wear a dramatic ensemble custom-designed by Donatella Versace.

His first outfit was an ornate cape that was covered in intricate gold beading. He removed the cape and underneath was a golden suit of armor. His final look was a bodysuit covered in crystals and Versace’s signature house print.

The teen heart-throb Timothee Chalamet graced Met Gala 2021 in an all-white ensemble by Haider Ackermann. He went for a satin tuxedo jacket with black lapels, paired with white sweats and Converse shoes.

Emma Chamberlain compensated for not going to Prom with Met Gala. She wore a glittering dress by Louis Vuitton which had two diamond shapes melded together in the top half and an attached miniskirt with a square train in the button. Chamberlain said,

“Actually this kind of feels like going to prom, because of the nerves. You’re not that scared but you’re excited. This is my prom experience.”

Poet Amanda Gorman made her first Met Gala appearance in a symbolic look inspired by the Statue of Liberty. She wore a strapless embellished royal blue Vera Wang dress with a sheer train and cut-out details on the back. Likewise, she completed the look with matching, custom Stuart Weitzman heels, a book-shaped clutch, and a crystal Jennifer Behr headpiece.

Another celebrity on our list is TikTok star, Addison Rae who choose a vintage red Gucci gown as a celebration of American fashion. Her dress resembled the dress of her dear friend Kourtney Kardashian from Christmas 2019. Both dresses are from the same 2003 Tom Ford for Gucci collection and both look bomb in their dress.

The Gossip Girl actor Evan Mock wore a full leather face mask, black shorts, a white shirt, and a black blazer. He surprised everyone by taking off his face mask and flaunted his pink hair. Likewise, his Thom Browne outfit was styled by Taylor Okata.

The step-daughter of Kamala Harris, Ella Emhoff made her Met Gala debut in an Adidas by Stella McCartney red diamond mesh bodysuit with matching trousers. She wore Earthlight trainers, Cartier jewels, and Eyewear by Stella.

Rapper Saweetie made a bold move with her custom red Christian Cowan gown. It had a train in two panels: one in red, yellow, blue, and white to represent the Filipino flag and the other in black and red for the Black American heritage flag. It was hand-embellished with 10 million crystals.

Rapper Megan Thee Stallion made her first Met Gala appearance in a structured asymmetrical tulle gown which she paired with simple heels and makeup. Her dress is said to be a silk georgette evening dress with all-over crystal embroidery embellished by hand at the Coach atelier in New York City. Her dress was an inspiration from Marilyn Monroe.

Chloe x Halle made quite a statement at the Met Gala 2021. Chloe wore a white gown with a high slit, impeccable sleeves, and a massive train. Likewise, Halle donned a pink Tina Turner-inspired bodysuit with a plunging V-neckline and lots of fringe details.

Kehlani wore a Crystal-embellished Aliette suit. It included a cropped jacket with exaggerated shoulder pads and high-waisted, wide-leg pants that stretched all the way to the floor. She completed the look with feathered waves, silver platform boots, and a whole jewelry store’s worth of diamond rings.

Even though the food did not impress Keke Plamer but she impressed her fans with her outfit. Keke graced the floor in a jaw-dropping black floor-length Sergio Hudson gown with glitter detailing.