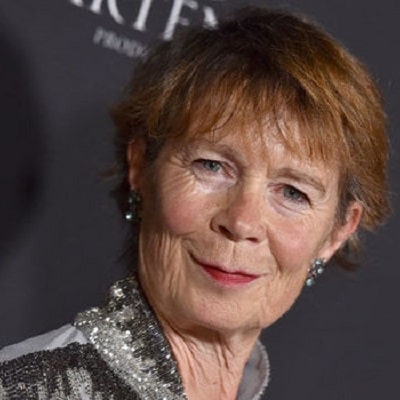 A 'naughty pickle' is how I'd best describe myself. I think fun and laughter is the whole point of life.

I would do nearly anything for a laugh, to tell the truth. And I'm a particular favourite with young men with earrings.

What is the relationship of Celia Imrie?

Celia Imrie is in a bit complicated relationship. She is in a relationship with Benjamin Whitrow who is an English actor and he is popular for his roles in the movies like Pride and Prejudice, Chicken Run, Bomber, and many more.

She does not believe in the tradition of marriage, and for that reason, she was never officially engaged with Benjamin.

The couple welcomed a son on August 2, 1994, whom they named Angus Imrie. Their son is also an actor and he acted in series like The Archers, Station Jim, and the movie The Kid Who Would Be King which was released in 2019.

Who is Celia Imrie?

Celia Imrie is a British actress and author who is best known for her film roles including ‘The Best Exotic Marigold Hotel’ film series, the ‘Bridget Jones film series, ‘Absolutely Fabulous: The Movie’, ‘Finding Your Feet’ ‘ Calendar Girls’, and ‘Mamma Mia! Here We Go Again’ as well as a darker role in Netflix’s ‘Malevolent’.

Celia was born in Guildford, Surrey, England on July 15, 1952, to Diana Elizabeth Blois and David Andrew Imrie. Her father was a radiologist and he was from Glasgow, Scotland. Celia is the fourth of five children of her parents.

Celia Imrie holds British citizenship but her ethnicity is a mix of Scottish and English.

Celia attended Guildford High School, a girl’s school located in Guildford. For further studies, she chooses acting as her major. Celia attended the Guildford School of Acting and completed her training in acting course. She was awarded an honorary doctorate on October 18, 2013, by the University of Winchester.

Celia Imrie has made her appearances in many films like Bridget Jones’s Diary, Calendar Girls, Highlander, Hilary and  Jackie, The Borrowers, and many others. Moreover, she appeared in many television series such as The Darling Buds of May, Upstairs,  Absolutely Fabulous, Downstairs, and Casualty to name a few.

Moreover, she appeared in theaters including Plague Over England, The Rivals, Hay Fever, King Lear, The Sea, and many more. Her recent work in 2019 is Party Time and Celebration.

Apart from acting, she is also an excellent writer and has published books such as The Happy Hoofer, Not Quite Nice, Nice Work(If You Can Get It), and Sail Away.

Likewise, she has been awarded The Clarence Derwent Award for Best Supporting Actress in 1992 for her role in The Sea.

Moreover, she was awarded the Olivier Award for Best Performance in a Supporting Role in a Musical titled Acorn Antiques: The Musical!. Likewise, Celia won UK WFTV Award for the EON Productions Lifetime Achievement.

Celia Imrie won the Best Ensemble award in the category Feature Dramedy for ‘Year by the Sea’ in 2016. Also, she has been nominated for Screen Actores Guild Awards in the category Outstanding Performance by a Cast in a Motion Picture for ‘The Best Exotic Marigold Hotel’ in 2013.

As of 2022, Celia has an estimated net worth of around $1 million. The reported net worth is estimated on a certain basis and it could fluctuate to some lesser degree.

She accumulated that sum of net worth from her career as an actor. Celia earns an average of $50,000 per annum from her profession.

Apart from television, she has harnessed wealth from various reputed theatre plays as well.

Celia does not like to harm others and has not been involved in any rumors and controversies in her personal and professional life.

Celia Imrie stands at a height of 5 ft. 5 inches and has deep ocean-colored blue eyes and light brown hair. But her weight, shoe size, dress size, etc. are not available.