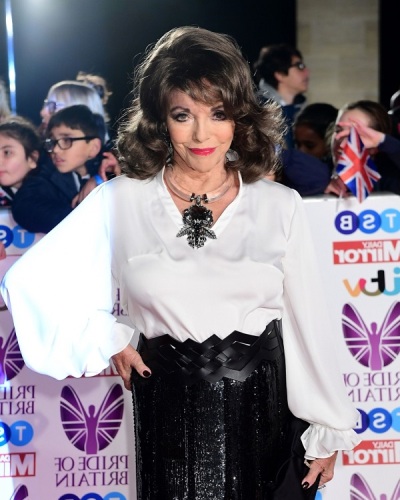 Actress Dame Joan Collins owns a flat in Central London and when it caught fire, she had to flee the property. She is thankful to her husband Percy Gibson and the London Fire Brigade for extinguishing the fire.

Dame Joan Collins and her Belgravia flat gutted in fire

Dame Joan Collins possesses a flat in Central London and it was engulfed in fire. The Fire Brigade of London came in at once and efficiently doused the flames. Dame shared a picture of her charred home situated in Belgravia on her Instagram this Sunday. She wrote:

“THANK U from the bottom of my ❤️ to the marvelous @LondonFire who attended to the terrifying fire yesterday in our flat. #threealarmfire My hero Percy had already doused the flames consuming the entire wall with handheld extinguisher (#donttakethisrisk). #gratitude #firefighters.”

“And thanks also to the @NHSEnglandLDN #nhs #emt #Ambulance crew who took care of our smoke inhalation and comforted me. And the wonderful @metpoliceuk who kept the street closed and everyone safe. #gratitude.”

The London Fire Brigade and their response

“So sorry you had experience this. But glad we were able to help. Do let us know if we can offer any further assistance.”

They also issued a statement which read:

“Two fire engines and around 10 firefighters were called to a fire at a flat on Eaton Place in Belgravia.”

“Part of a flat on the first floor of the seven-storey building was damaged by the fire. Two people left the property before the brigade arrived.”

“The brigade was called at 4.28pm and the fire was under control by 5.36pm. Two fire engines and a turn table ladder from Soho fire station attended the scene.

“The cause of the fire is under investigation.”

As the fire-fighters revealed that they are still investigating the cause of the fire.

Dame Joan Collins and her career and personal life

Born in 1933 on 23 May in Paddington in London, Dame is now 85 years of age. At her age of 22 in 1955, Dame proceeded to Hollywood and began acting. She did film and TV roles and later appeared in horror films. She also has done soft pornographic roles and in the 1980s began stage performances. In 1983, she got a star in the Hollywood Walk of Fame.

She is also a column and has penned several books and novels. She was honored with Dame title by the Queen of England in 2015.

Joan has been married five times. Her first husband was Irish actor Maxwell Reed who allegedly raped her. She married him in 1952 and divorced four years later. She had an affair with Harry Belafonte. Joan dated and got engaged to Warren Beatty but his infidelity led to their breakup.

She then married singer Anthony Newly in 1963 and divorced him in 1971. She married a businessman Ron Kass in 1972 and separated in 1983. Joan has two children with Anthony and one with Ron. On 3 November 1985, she married Swedish singer Peter Holm but took divorce from him in 1987 on 25 August. She met and married Percy Gibson on 17 February 2002.