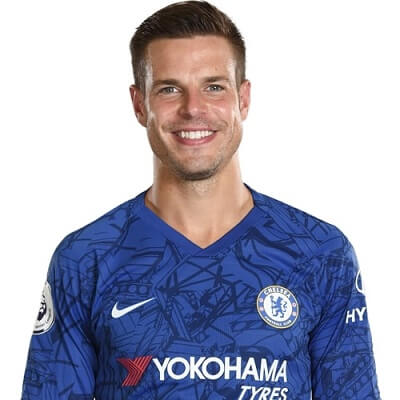 Since I was a kid, even in school I gave my best, playing with my friends, 100 per cent sweating, fighting. When I was playing any game, even video games, I wanted to win

I've never run with the bulls. I prefer to watch from the safety of a balcony

People see the nice side of the game, but behind it all, there is a sacrifice that they don't see: the pressure, the repercussion, the way that impinges on your life.

The couple dated for a long time before exchanging wedding vows in July 2015 in his hometown Pamplona, Spain. Since then, they have been happily married.

From their marriage, the Spanish couple has two daughters, Carolota, and Martina.

Who is Cesar Azpilicueta?

Cesar Azpilicueta is a Spanish professional footballer. He plays as a defender for the Spanish national team and captains Premier League club, Chelsea. With Chelsea, the Spaniard has won the Premier League, FA Cup, Europa League, and more.

Cesar Azpilicueta was born as Cesar Azpilicueta Tanco on 28 August 1989 in Pamplona, Spain. As of 2020, his age is 30. Very little is known about Cesar’s early life and family background. He has not revealed anything about his parents.

He does have an older brother named Juan Pablo (born in 1980) who was also a footballer and competed exclusively in lower-league football as a midfielder. Azpilicueta spent his childhood days playing football in Pamplona, Spain. He joined his hometown club, CA Osasuna’s youth system when he was still very young. His ethnicity is Spanish.

Cesar Azpilicueta started his dreams of being a footballer with his hometown club, CA Osasuna. In 2007–08, at the age of 18, he established himself as a first-team regular. He started his career as a forward and later became a midfielder before eventually becoming a defender.

He joined the French side Marseille on 21 June 2010 where he won the Coupe de la Ligue 2011–12 and Trophée des Champions in 2010 and 2011. However, it was when he joined the Premier League with Chelsea when he started gaining attention from football fans all over the world.

On 24 August 2012, the English side completed his signing. Cesar made his Chelsea debut on 25 September 2012, starting in a 6–0 win against Wolverhampton Wanderers in the League Cup. The following week, he made his Premier League debut as a substitute in a win over Norwich City. He played 48 games in his first year as a Chelsea player including eight appearances in the English side’s UEFA Europa League triumph.

The following season, Jose Mourinho took charge as the manager of the club and deployed Azpi in the left-back role as a long-time replacement to Chelsea great, Ashley Cole. At the end of the season, he was awarded Chelsea’s Player’s Player of the Year.

In the 2014-15 season, Cesar was instrumental in the club’s League Cup and Premier League triumphs. Chelsea had won the Premier League after a five-year wait.

After the arrival of the Italian coach, Antonio Conte, he shifted to center back in a 3-4-3 formation after two successive defeats.  On 13 December 2016, he signed a new three-and-a-half-year Chelsea contract and made his 200th competitive appearance for the club. Azpilicueta proved to be instrumental and played every minute of the season as Chelsea won the Premier League. In July 2017, after the departure of club legend and long-time captain, John Terry, he was appointed vice-captain to center back, Gary Cahill.

Azpilicueta became the club captain ahead of the 2019–20 season.  On 23 October, he made his 350th Chelsea appearance.

On 1 January 2020, Azpilicueta marked his 100th appearance as Chelsea captain with a goal and was named man of the match in the 1–1 draw against Brighton & Hove Albion

Azpilicueta stands at a height of 5 feet 1o inches and weighs around 65 kg. He has brown hair and a pair of green eyes.

Cesar Azpilicueta has an estimated net worth of around $10 million as of 2020. Playing for one of the richest clubs in the world, the Spaniard makes a good sum of money. His annual salary as a Chelsea player is $8.8 million.

You may also like to read the Bio, Career, Body Measurements, Net Worth, Social Media, Relationships, and more about Daniel Drinkwater, Mohamed Salah, Jesse Lingard, etc.