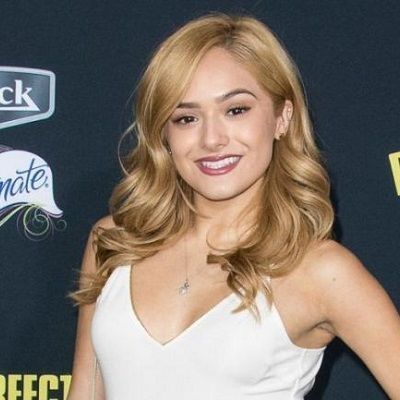 Chachi Gonzales is married to actor Jukka Hildén on September 28, 2019.

The pair has two children together.

Previously, she was in a relationship with famous YouTuber ‘Josh Leyva’ from 2014 to 2017.

Who is Chachi Gonzales?

Chachi Gonzales is an American dancer, choreographer, plus actress. She was featured in the dance crew of I.Am.Me. which was the winner of America’s Best Dance Crew in 2011.

Chachi was born in Texas, the United States on January 23, 1996. Her real name is Olivia Irene Gonzales and her ethnicity is Spanish-American.

She has two sisters: Leslie and Dominique, and two brothers Chris and David. She is the youngest child of David L. Gonzales and Guadalupe Gonzales.

Her parents were engaged in the apparel business. And in 2011, they launched a line of apparel and sweatpants.

At the age of three, she joined the dance studio and was trained as a ballet dancer. After three years at the studio, she witnessed hip-hop dance crew for the first time.

Gonzales was immediately impressed and she decided to join the hip-hop dance. She joined Lanier Middle School where hip-pop were taught. After months of training, she became more confident.

Her teachers were impressed with her dance skills and asked her to lead the group she was being taught in. She was enrolled in few classes of the Marvelous Motion Studios. From then Chachi continued to dance as much as possible.

Gonzales appeared in the Disney Dance program ‘Shake Up’ with her crew in 2012. She made her debut film ‘The Legend of Darkhorse Country‘. Chachi appeared as a major cast member in the second season of ‘East Los High‘.

She also did multiple appearances in major TV shows and films. Because of her growing popularity, she is invited to different countries for a workshop.

The salary of this American dancer is pretty impressive. Her estimated yearly earning from YouTube is $4.2 K – $67 K. According to some sources, her estimated net worth is $185,000.

Chachi also has her own line of apparel with the name ‘Dotheads by Chachi’.

Chachi leaves the dance crew I.Am.Me and there was no good bond between Chachi and crew members. Chachi sued her family claiming that they abused her and stole her money.

But her sister said that Chachi was a pathological liar who didn’t take any responsibilities.

Chachi is 5 feet 4 inches tall and weighs 51 kg. She has blonde hair and eyes in dark brown color.

She has her own YouTube channel, Chachi Gonzales with more than 1.65 M subscribers.