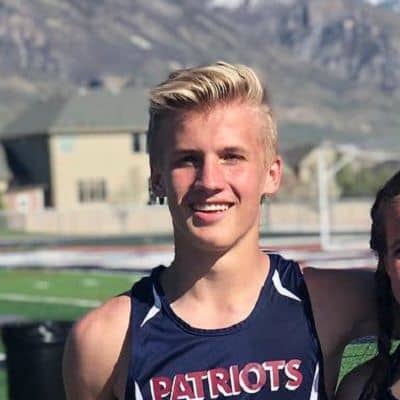 But as he often uploads different videos with Kesley Leroy, and there are different rumors that they are dating. Though, he has personally never talked about his matter.

They often post their pictures and videos on social media with the heart emojis. Chad has also called Kesley his sweetheart in different posts.

Who is Chad Franke?

Chad Franke is one of the well known social media stars. He is also a musician from America.

His parents have their own family YouTube channel, 8 Passengers. The channel has accumulated over 2.4 million subscribers.

Born on February 2, 2005, Chad is now 15 years old. His birthplace is in Seattle, Washington. His father, Kevin Franke was an engineer and later also worked as a professor at a university.
Later on, he decided to retire and create YouTube videos along with his wife. Chad’s mother’s name is Ruby Franke who is also a social media star.
Chad has an older sister named Shari Franke, and three younger sisters, Abby, Julie, and Eve. Likely, he has a younger brother named Russell Franke who is just 8yrs old now. All of them are a part of their family videos and some of them have their own Youtube channel too.
He holds the American nationality and is of Norman ethnicity.

Chad was homeschooled in the past. And, in April 2016, his parents decided to enroll him in a regular high as per more development. However, his school’s name is not mentioned yet.

Chad Franke was firstly introduced in his family vlogs. The family YouTube channel ‘8 Passengers’ was created on January 7, 2015, and has more than 2.45 million subscribers. He was seen in their third video talking about his home education. Moreover, he was also seen later on doing different household works like cleaning the window panes, watering the plants, etc.

He is seen close with his family members making different videos and having fun. His thirteenth birthday with his grandparents was a huge birthday bash at a taco parlor.

Later, he showed all of the gifts that he had received on his birthday on other videos. Like this, doing his own vlogs he has now led his career rising as a good YouTuber and social media star.

His first debut video was entitled “Welcome To My Channel.” It collected almost about 42,611 views. One of his popular videos on his channel is “What’s on Our PHONES,” which has gained over 1 million views.

He posts different vlogs and other videos about his experiences. He posted different videos mentioning like getting his braces for the first time, sharing his thoughts about receiving his first salary from YouTube.

Chad has also taken up many challenges that have gone viral on the internet.

Being a popular social media star, his net worth is from $1 Million to $5 Million. Talking about his family, their channel has over 2.5 million subscribers and has accumulated over 1.2 billion views so far.

He hasn’t involved in any of the controversies about his professional life. Though there are different rumors that he is dating Kesley Leroy.

Chad Franke stands with a height of 5 feet 3 inches and weighs 55 kg. Similarly, his chest-waist-arms are 35-28-12 inches respectively.

His shoe size is 6 (UK). Furthermore, he has a face with green eyes and blonde hair.

Click on the link to know the bio of more such popular You Tubers Slim Albaher, Poppy, LostNUnbound, and Sameeksha Sud.