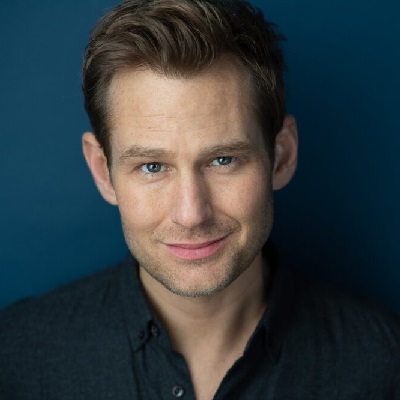 Chad Kimball is happily married to Emily Swallow. His wife, Emily is also an actress. She is popular for her role as Kin Fisher of The Mentalist and Amara of Supernatural.

The couple first met at La Jolla Playhouse. At the time, she was there to see him in Come From Away. In the play, Chad portrayed the character of Kevin T./Garth.

Later, they got married on the 26th of August 2018 in a private wedding ceremony attended by close friends and family members in Washington.

Last, on the 26th of August 2018, the couple completed their 2nd year anniversary.

Who is Chad Kimball?

American Chad Kimball Tony Nominated theatre artist and actor. He is renowned as Huey Calhoun of the Broadway’s play, Memphis.

Currently, he is starring the play, Come From Away.

Chad confirmed he was tested positive for the COVID-19 through his Facebook post on the 23rd of March 2020. The actor had symptoms of a mild headache, congestion, and residual cough. Also, he mentioned that the flu he got was the worst flu that he ever had.

For the time being, he remained in his apartment quarantine far from the public including his wife too. Through his Instagram post, he confirmed that he is feeling better.

After fighting a tough fight with the virus, he came out from quarantine on the 30th of March 2020.

Chad Kimball was born on the 2nd of September 1976 in Seattle, Washingon to Hal and Loretta Kimball. He is of Brtish ethnicity.

He has a sister, Jill Avis, and brother, Todd.

Talking about his educational background, in 1999, he earned a bachelor’s degree from Boston Conservatory with honors in Fine Arts. Before that, she completed her High School education from Roosevelt High School in his hometown.

Chad Kimball started his career as a theater artist through regional theatres. At the time, he was part of theatre plays like Sweeney Todd in Signature Theatre. Later, he moved to New York City to expand his career as he was hired for Broadway musical play, The Civil War. However, the show shut down within three weeks.

Moving forward, in 2000, he joined Off-Broadway for the play, Godspell. At the same time, he was in Stephen Sondheim’s Play Into the Woods in Broadway as Milk-White the cow. Also, he became part of the regional play like Baby at Paper Kill Playhouse, Millburn, New Jersey, and Litte Fish at Blank Theatre, LA.

In 2008, he landed the lead character, Huey Calhoun for the Broadway Musical, Memphis at La Jolla Playhouse. The character became the peak point of his career. For the role, he was even nominated for the Tony Awards. On the 23rd of October 2011, he gave his last performance as Calhoun. He left the play due to nerve damage.

As of now, he is associated with the play, David Hein’s Broadway musical Come from Away.

Apart from theater, he is also a popular face in TV series too. Some of the TV series he featured include The ½ Hour News Hour, The Good Wife, and Wallflowers.

In 2011, he appeared in the movie, Memphis the Musical as Huey Calhoun. The movie happens to be his debut movie too.

Chad Kimball has blue eyes with brunette hair. He has a decent height and an average weight.

Till the date, he has not been involved in any sort of controversy and scandals that created a buzz in the media. Besides that, he has managed to maintain her distance from any kind of rumors too.

You may also read the bio of Sam Jaeger, Kiley Casciano, and John Finn.