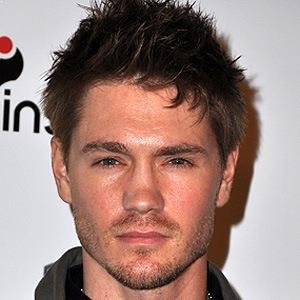 When asked about what he thinks is the most important issue he says, "Kids being drug-free. I always want kids to be allowed to have a chance or a shot in life."

I didn't fit in to the trends at school, but I did just fine.

I'm scared of dolls. When I was a little kid, we used to go to my grandma's house and she'd have all these porcelain dolls and they are just freaky. They have those little painted faces on them...and ugh! They used to scare the crap out of me.

Writing inspires me. I couldn't live without my journal.

What is the relationship of Chad Michael Murray?

Chad Michael Murray became engaged to his ‘One Tree Hill’ co-star Sophia Bush in May 2004. They later married on April 16, 2005, in Santa Monica, California.

The pair announced their separation in September 2005, after five months of marriage. They were granted a divorce in December 2006.

Next, Chad began dating Kenzie Dalton, whom he met in 2005 when Dalton, a first runner-up in the 2005 Miss North Carolina Teen USA pageant.

They became engaged in April 2006. However, in August 2013, they called off their seven-year engagement. Additionally, Murray dated his ‘Left Behind’ co-star Nicky Whelan from October 2013 to May 2014.

He began dating his ‘Chosen’ co-star Sarah Roemer in 2014 and, it was announced in January 2015 that he and Roemer had married, and were expecting their first child.

Who is Chad Michael Murray?

Chad Michael Murray is an American actor, spokesperson, writer, and former fashion model. People mostly know him for portraying Lucas Scott in the WB/CW drama series ‘One Tree Hill’ from 2003 to 2009.

Murray was born in Buffalo, New York on August 24, 1981, to Rex Murray, an air traffic controller, and was abandoned by his mother at a young age.

Additionally, he has three brothers, one sister, one half-brother, one step-sister, and one step-brother. He always wanted to become an actor since his childhood years.

He is of American nationality. Furthermore, he belongs to a mixed ethnic background of English, Irish, Polish, German, and Swiss-German.

Chad Michael Murray initially moved to Hollywood where he supported himself modeling for such clients as Skechers, Tommy Hilfiger, and Gucci. Next, in 2000, he appeared in the TV series ‘Undressed’ and ‘Diagnosis Murder. In 2001, he appeared in ‘Murphy’s Dozen’ and ‘Megiddo: The Omega Code 2’.

Since then, he has appeared in numerous other movies and television series. All in all, he has over 30 credits as an actor.

Some other movies and television series that Murray has appeared in are ‘Sun Records’, ‘Outlaws and Angels’, ‘Scream Queens’, ‘Other People’s Children’, ‘Texas Rising’, ‘Left Behind’, ‘A Madea Christmas’, ‘Cavemen’, ‘Southland’, ‘The Haunting in Connecticut 2: Ghosts of Georgia’, ‘Fruitvale Station, ‘To Write Love on Her Arms’, ‘Scruples’, and ‘House of Wax’ among others. Additionally, he also has credit as a director and writer.

Murray has not revealed his current salary. However, he has an estimated net worth of around $4 million as of 2022.

Murray became part of several controversies after he was rumored to have cheated on Sophia Bush with Paris Hilton. Additionally, his relationship and divorce with Bush also attracted numerous controversies along his way.

Talking about his body measurement, Chad Michael Murray has a height of 6 feet or 183 cm. Additionally, he weighs around 83 kg or 183 pounds.

Furthermore, his hair color is blonde and his eye color is hazel.

To know more about Cody Deal, Don Mitchell, and Jamal Woolard, please click on the link.