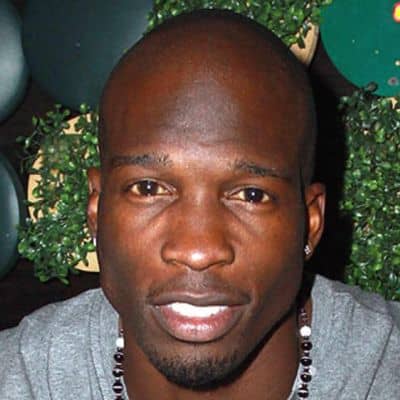 Chad Ochocinco is a father of seven children from various relationships. Presently, he is engaged with Sharelle Rosado.

Sharelle is recognized as a real estate agent, broker, and social media influencer. She is featured in Netflix’s hit reality show, Selling Tampa.

In October 2020, the beautiful couple officially announced their relationship in the media. Chad proposed to her in January 2021 and shortly after they got engaged.

The lovebird is expecting a baby, which will be the eighth child of Chad.

Chad was earlier married to model Evelyn Lozada. In early 2010, the pair started dating, and eventually, Chad proposed to her in November. They tied the knot in July 2012.

However, their marriage couldn’t last long, and parted way just after two months of marriage. They divorced on September 19, 2012.

Who is Chad Ochocinco?

Chad Ochocinco is recognized as an American former football player, television personality, and entrepreneur. He is popular as one of the NFL’s most productive wide receivers of the 2000s.

Ochocinco was a six-time NFL Pro Bowler and 3-time All-Pro during his ten seasons with the Cincinnati Bengals.

Chad was born on the 9th of January 1978, in Miami, Florida. His birth name is Chad Ochocinco Johnson. According to his birth date, he is 43 years old. His Sun sign is Capricorn.

Further, he holds an American nationality and belongs to All-American descent.

Chad went to Miami Beach Senior High School graduated in the year 1997. He then enrolled at Langston University and later transferred to Santa Monica College.

While attending college, he played with future NFL wide receiver Steve Smith. He was then recruited by coach Dennis Erickson to play for the Oregon State University in 2000.

The same year, he led his team to an 11-1 season and a victory over Notre Dame in the Fiesta Bowl alongside teammates T.J. Houshmandzadeh. He also broke a school record for the longest touchdown reception with a 97-yard reception.

He was first drafted by the Cincinnati Bengals of the NFL in the second round of the 2001 NFL Draft. He played for the Bengals for 10 seasons until 2010.

He was then traded to the New England Patriots in 2011 where he played in Super Bowl XLVI.

On April 17, 2014, Johnson signed a two-year deal with the Montreal Alouettes of the Canadian Football League. That year, he only appeared in five regular-season games during the season.

In 2017, he played one game for the Mexican team in the Liga de Futbol Americano Professional de Mexico.

Chad was sued by the mother of one of his children for failing to make child support payments in November 2012. The same year, he was arrested on a charge of domestic battery according to the Davie, Florida police.

Similarly, he was sentenced to thirty days in jail for violating his probation on June 10, 2013. Several times he was arrested for allegedly violating the terms of his probation.

As of 2021, Chad is estimated to have a net worth of almost $5 million. His last income from the NFL was around $925 thousand with the New England Patriots from his 2011 contract.

Throughout his football career, he amassed nearly $46.678 million as a wide receiver. In addition, he also earned through the endorsement of major brands including Reebok, GoDaddy, Unilever’s Degree Men deodorant, and so on.

Ochocinco also endorsed Bernie Sanders for President of the United States in February 2016.

Chad had bought a six-bedroom four-bathroom 3,410 sq. ft. home for a $150,000 loan in Miami Gardens Property. Unfortunately, he failed to pay it back and the property has been foreclosed.

Presently, the worth of the property is around $1.1 million. Similarly, Johnson bought and re-designed a SmartCar which wroth is roughly $18,000.

The player has an athletic body physique with a towering height. He stands at the height of 6 feet 1 inch tall and his weight is about 85 kg.

Likely, he has a dark brown pair of eyes and he is bald.

The player has verified social media sites. He is active on Instagram under the username @ochocinco where he has more than 1.8m followers.