Chadwick Boseman was an American actor who appeared as the lead actor of Marvel's Black Panther. Chadwick died due to cancer at the age of 43. 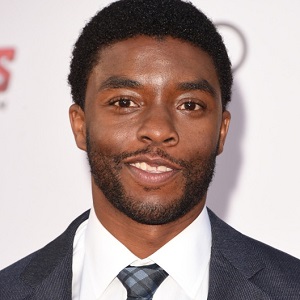 I think there's a difference between a working actor, a movie star and a celebrity. They're all three different things.

I love all types of music. Jazz, classical, blues, rock, hip-hop. I often write scripts to instrumentals like a hip-hop artist. Music inspires me to write. It's either music playing or completely silent. Sometimes distant sound fuels you. In New York there's always a buzzing beneath you.

As an African-American actor, a lot of our stories haven't been told.

Chadwick Boseman was married to his girlfriend Taylor Simone Ledward. The couple did not have any children.

He was survived with his wife Taylor and family at the time of his death due to cancer.

There is no information about his wedding and marriage details. Chadwick had kept his romantic life low-key.

Who is Chadwick Boseman?

Chadwick Boseman was an American actor. He is best known for portraying in Marvel’s Black Panther, Jackie Robinson in the American biographical sports film, 42 (2013). Moreover, he was featured in James Brown in Get on Up (2014), and T’Challa in the Marvel Studios film Captain America: Civil War (2016).

Chadwick: Cause of Death

Chadwick Boseman died on 28th August 2020, in Los Angeles, California, U.S. at the age of 43 due to cancer. He was battling with colon cancer since four years. The news of his death was confirmed by his Twitter handle.

Chadwick Boseman was born as Chadwick Aaron Boseman on 29 November 1976, in Anderson, South Carolina, USA. Chadwick was an American by nationality and he is of African-American ethnicity.

He was the son of African-American parents Carolyn Boseman and Leroy Boseman. His father was a businessman and his mother worked as a nurse. He was raised in the city of Anderson by his parents.

He graduated from T. L. Hanna High School in 1995. He later graduated from Howard University in Washington, DC, in 2000 with a bachelor of fine arts in directing. After that, he attended the British American Drama Academy in Oxford.

Boseman began his career as a drama instructor in the Schomburg Junior Scholars Program in 2002. He got his first television role in 2003, in an episode of Third Watch. After doing several minor roles in movies and TV, he moved to Los Angeles to pursue a full-time acting career in 2008. In 2008, he played a recurring role on the television series Lincoln Heights and appeared in his first feature film, The Express.

In 2010, he landed a regular role in another television series, Persons Unknown. His first breakthrough role came with the 2013 film 42, in which he played Jackie Robinson. He played the Marvel Comics character T’Challa / Black Panther in the 2016 film Captain America: Civil War.

His movies Marshall and Black Panther are under post production. He had a net worth of $12 million but his salary is not revealed yet.

There are no any rumors regarding his personal and professional life. It seems he is doing best job without harming others and has been a straight person in his life, for which he has not been in any controversy yet.

Chadwick had a height of 6 feet. His hair color and eye color both were black. Other information on his body measurement like weight, shoe size, etc. is unknown.

Due to cancer, he was suffering from drastic weight loss since couple of years.