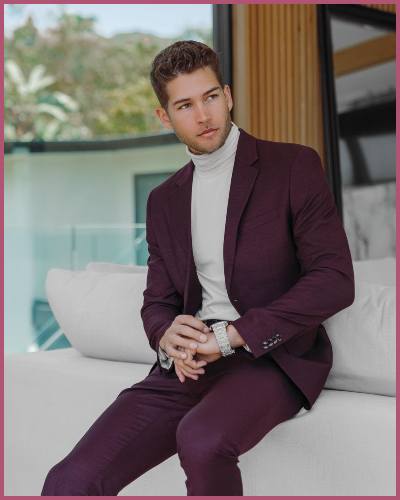 Chanel West Coast is expecting her first child with her boyfriend Dom Fenison.

The Ridiculousness star exclusively shared details of her Pregnancy to E! News on Thursday, June 2, just months after their relationship official. She disclosed,

“I don’t know if it’s a boy or girl yet. I’m just praying for a happy, healthy baby. I’m just really excited for this next journey in my life. It’s probably my scariest journey yet, but sometimes the scary roads lead to the best endings.”

The two have been dating since earlier this year. Fans are now wondering to get to know more about the musical artist’s unborn baby father.

Who is Dom Fenison?

As a model talking about his physical appearance, he stands at a height of 6 feet 2 inches tall. His waist size is 31 inches. Similarly, he has a brown hair color and his eyes color is green.

He has appeared in a multitude of campaigns for popular labels such as Givenchy. Nike, and more. Fenison also appeared in the music video for Hailee Steinfeld and Alesso’s song, Let Me Go.

Besides, he is the founder of Music City Accommodations. Similarly, he has been functioning as an authorized realtor at Beverly and Company located in Los Angeles, California.

Also read “Who is Miracle Watts? More on her Life and Career!”

Earlier, he worked as a Listing Coordinator at Douglas Elliman Real Estate from September 2019 until February 2022.

He grew up with three siblings named Herman Fenison, Michelle Fenison, and Gloria Fenison. Talking about his academic background, he earned his bachelor’s degree in accounting and enterprise administration from Western Governors University.

What is the Net Worth of Dom Fenison?

Dom has amassed an impressive amount of wealth throughout his multiple careers as a model and realtor.

As of 2022, he has an estimated net worth of around $400 thousand. However, his yearly/monthly income is still under review. According to Indeed.com, an average realtor earns $92,231 a year in Los Angeles.

Also read “Who is Ari Emanuel married to? Learn more about his spouse, Sarah Staudinger”