Updated On September 27, 2022 | In controversy , Dating , Relationship
Share this 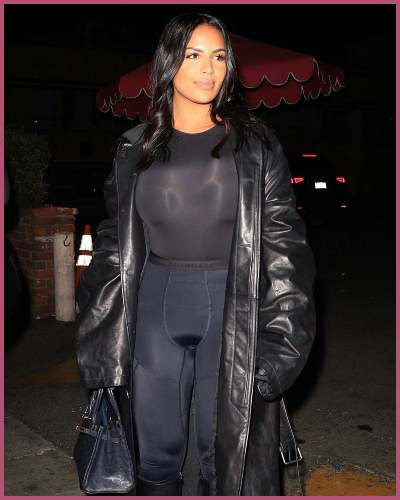 Update 2022: Kanye and Chaney are longer together as a romantic couple. The two split amicably after five months of dating. As of now, Kanye is rumored to be dating OnlyFans model Monica Corgan.

Kanye West‘s new rumored girlfriend, Chaney Jones is making headlines since she has been linked to him.

Recently, Chaney was spotted at Los Angeles International Airport where TMZ queries her if she sees the resemblance between herself and Kim. According to fans, she look-alike Kim from her physical appearance to her fashion.

In response, the 24-years old model told TMZ, “No, not really.” Before her comeback, she started laughing and said, “I don’t want to speak on that.”

Jones disclosed that she and her beau never discuss his estranged wife, Kim Kardashian. When reporters asked if she and Kanye talk about “Kim stuff,” she replied,

Jones also refuses to speak on Ye’s social media posts about Kim i.e, Ye has been suspended from Instagram for 24 hours after violating the firm’s policies on hate speech on Kim Kardashian, Pete Davidson, and Trevor Noah.

When Jones was asked about Ye’s social media attack, she said,

“I think you should talk to him about that, I don’t want to speak on that,”

Chaney Jones is a social media influencer and model. She recently came into the spotlight of the media after being romantically linked to Kanye West.

Besides, she is the COO of the first State Behavioural Health, a company that offers “counseling provided by trained behavioral professionals.”

The model was born to her father Avon Jones and her mother Nicole Jones. She grew up along with a brother named Tre.

Talking about her academic qualification, she enrolled at Caesar Rodney High School in Delaware. In 2020, she earned a bachelor’s degree from the University of Delaware. Currently, she is pursuing a master’s degree in counseling at Wilmington University.