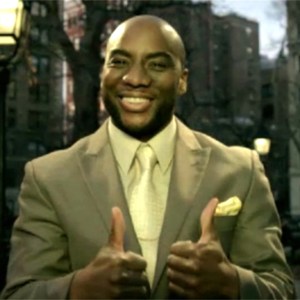 If you don't have anything nice to say- say it anyway

Never stunt your own growth by dismissing something just because it doesn’t feel familiar.

Reflecting on a personal life of Charlamagne Tha God, he is a married man. He is married to his longtime girlfriend, Jessica Gadsden. The couple tied the knot on 6 September 2014. The couple started dating since the 1990s. They are high school sweethearts. She is a personal trainer and fitness instructor specializing in body and bodyweight training, bodybuilding, pilates, and gymnastics.

The couple is blessed with two children and both are beautiful daughters. His children’s names are not yet revealed.

Who is Charlamagne Tha God?

Famous as ‘Charlamagne Tha God’ is an American radio presenter and television personality. He is a co-host of the nationally broadcasted radio show, The Breakfast Club with DJ Envy and Angela Yee, and stars in Guy Code, Guy Court and Girl Code, VJ for The Week in Jams with DJ Envy and Sofi Green. He gained popularity by appearing on The Wendy Williams Experience T.V show.

Charlamagne Tha God was born on June 29, 1980, in South Carolina, U.S.A. His nationality is American and belongs to the African-American ethnicity.

His birth name is Lenard McKelvey. He was born to Larry Thomas McKelvey(father).

His mother’s name is unknown but he once tweeted that his mother is Jehovah’s Witness. He was raised up by his family in a friendly and entertaining environment in Moncks Corner.

Talking about the education background of Charlemagne, he went to night school and he did not go college. He says that his internship in the year 1998 at the radio station is his college. As he got opportunities from that experience.

Charlemagne made his professional debut in acting in the year 2009 and appeared in the film Kiss & Tail: The Hollywood Jumpoff. Because of his minor role, he didn’t get so much popularity; however, he struggles more and more to get the major role and successful films.

He also appeared in several low-rated films including This Thing of Ours, Hip-Hop POV, Charlamagne & Friends etc. Charlamagne is a radio personality with DJ Envy and Angela Yee on The Breakfast Club on Power 105.1 in New York City. Guy Code, a comedy television show on MTV2 that talks about a special code of conduct just for men where he is a cast member.

He currently stars in and hosts MTV2 show Uncommon Sense.

He has accumulated a net worth of $2 million dollars.

Rumors were that Charlemagne’s skin was a shade lighter because he bleaches the skin. But he denied the rumors by saying that he did not breach the skin and instead it was his dermatologist,  Dr. Natasha Sandy who helped him.

In June 2017, he was in a controversy when he spoke about killing transgender women on his radio show. Transgenders were protesting against him.

Charlamagne has a height of 5 feet 6 inches and weighs 72 kg. His hair color is naturally black but now he is bald. His eye color is dark brown. His chest, biceps and hip size is 42-15-33 inches respectively. His shoe size is unknown.

Ariana Grande reacts to the recent comments on their relationship by Pete Davidson!