Late actor Corey Fogelmanis was a father of four. 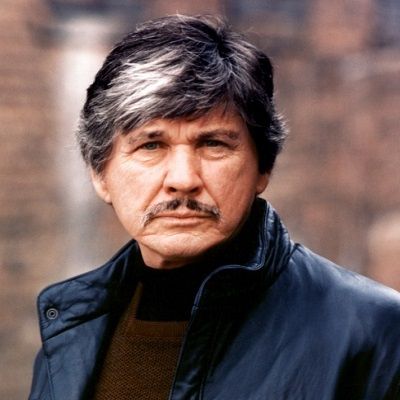 "I don't have friends, I have thousands of acquaintances. No friends. I figured I had a wife and children,"

"The fear really hits you. That's what you feel first. And then it's the anger and frustration. Part of the problem is how little we understand about the ultimate betrayal of the body when it rebels against itself"

"Audiences like to see the bad guys get their comeuppance"

"Maybe I'm too masculine. Casting directors cast in their own, or an idealized image. Maybe I don't look like anybody's ideal"

"I look like the guy who has a bottle of beer in my hand".

Corey Fogelmanis was first married to Harriet Tendler in 1949, they met in Philadelphia when they were fledgling actors. Together they had two children Tony’ and ‘Suzanne’. But they divorced in 1965.

Later, on October 5, 1968, Charles married another woman. She was an English actress Jill Ireland whom he met in 1962, at that moment she was married to a Scottish actor David McCallum and they even shared a screen together in The Great Escape.

Bronson and Jill also had two babies together Zuleika Bronson and Katrina Holden Bronson. They were married until Jill died of breast cancer on May 18, 1990, aged 54. Now their daughter Katrina is an American film director.

In December 1998, he married for the third time. He married a former employee of Dove Audio who had helped record Ireland in the production of her audiobooks Kim Weeks. They were married for five years but, in 2003 Bronson died of Pneumonia.

Who was Charles Bronson?

Charles Bronson was an actor from America. He was famous for the role of a police officer, gunfighter, and vigilante in the revenge-oriented plotline.

He had long-term associations with film directors like Michael Winner and J. Lee Thompson. He is famous for his role in Death Wish.

On August 30, 2003, Bronson passed away at age 81. His health worsened in his later years, and he retired from acting after undergoing hip-replacement surgery in August 1998.

Although it was said he died from pneumonia. But, he was suffering from diseases like respiratory failure, metastatic lung cancer, chronic obstructive pulmonary disease, and congestive cardiomyopathy which were not cited as his cause of death.

Charles was born on November 3, 1921, in Ehrenfeld, Pennsylvania. He was 81 years old when he died. Charles was born with the name Charles Dennis Buchinsky. And he belonged to the American-Lithuanian nationality.

He was born to father Valteris P. Bučinskis from Druskininkai in southern Lithuania and mother Mary (née Valinsky) from Tamaqua, Pennsylvania.

They both worked in a coal mine. Bronson was 10 when his father died and started working in mine too. He also had a brother Roy Buchinsky and a sister. Other than that there is no information about his siblings.

Bronson was the first member of his family to graduate from high school although the school’s name is not mentioned. After his graduation from high school, Charles went to ‘Pasadena Playhouse’.

Charles Bronson started working in a coal mine after his father’s death at 10. His family was so poor that, he had to wear his sister’s dress to school due to lack of clothing.

Charles worked there until he entered military service during World War II then, he was enlisted in the United States Army Air Force and served in the 760th Flexible Gunnery Training Squadron.

In 1945, Bronson served as Boeing B-29 Superfortress aerial gunner with the Guam-based 61st Bombardment Squadron within the 39th Bombardment Group, which conducted combat missions against the Japanese home islands. He then received a Purple Heart for wounds received in battle.

After World War II, Charles worked at many jobs until joining a theatrical group in Philadelphia, Pennsylvania. He even shared an apartment in New York City with Jack Klugman while both were aspiring to play on the stage. In 1950, he moved to Hollywood, got into acting classes, and began to act in small roles.

Throughout his career, Charles has been a great actor. He was nominated in 5 award shows, out of them he won three. His first nomination was in 1961. Charles was nominated for ‘Outstanding Performance in a Supporting Role by an Actor or Actress in a Single Program’ in Primetime Emmy Awards for the show “General Electric Theater”.

In 1996, Bronson was awarded the “Golden Boot Awards” which was his first-ever winning award. Similarly, in 1972 he won Henrietta Award for “World Film Favorite” in Golden Globes, USA. However, the final award he won was Star on the walk of Fame for Motion Picture’ in 1980.

Charles Bronson’s estimated net worth was $12.5 million. At the peak of his career, he was the highest-earning actor. He was paid $1 million for each of “The Stone Killer”, “Chino”, “Death Wish” and “St. Ives”.

He earned $1.5 million for “Death Wish II”. He earned $2 million for “10 To Midnight” in 1982 which is the same as $5 million in today’s dollars. In addition, he would receive 10-15% of gross receipts from movie ticket sales and film rentals from Warner Brothers.

Charles’s marriage to English actress Jill Ireland was a controversial one. He met Jill for the first time in 1962, back then she was married to a Scottish actor David McCallum.

At the time, Bronson shared the screen with McCallum in The Great Escape. He reportedly told him, “I’m going to marry your wife”. Soon McCallum and Ireland divorced. Then, Bronson and Ireland married in 1968 and remained hitched until her death in 1990.

Charles Bronson was 5ft 8 inches tall, and his hair color is Salt and Pepper. His eyes were blue and had a decent body mass.