Who is the present wife of Charles Spencer?

Currently, Charles Spencer is in a happily married relationship with his third wife, Karen Gordon on 18 June 2011. Karen Gordon is a Canadian Philanthropist, chief executive, and founder of Whole Child International, a kind of charity located in Los Angeles.

The couple got to know each for the first time on a Blind date. They have one child together named, Lady Charlotte Diana Spencer who was born on 30 July 2012.

Likewise, he has an interesting long-relationship history.

Charles Spencer got married to Caroline Freud on 15 December 2001. Later, they ended their union in 2007 through an official divorce. They are blessed with two children together. Caroline firstly gave birth to, The Honourable Edmund Spencer on 6 October 2003 and Lady Lara Spencer on 16 March 2006. 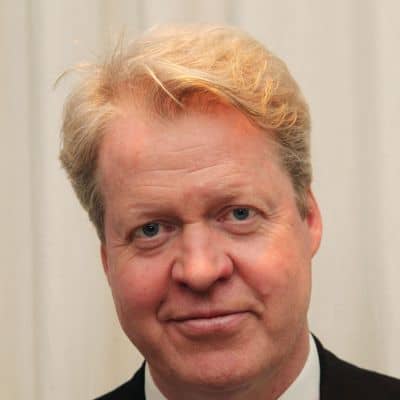 Who is Charles Spencer?

Charles Spencer is a famous English peer, journalist, author, and broadcaster. Diana, the Princess of Wales is his elder sister and he is the maternal uncle of Prince William, Duke of Cambridge, and Prince Harry, the Duke of Sussex.

Charles Spencer was born in London, England on 20 May 1964. Spencer is 57 years old as of 2022 and he maintains British nationality. He belongs to the English ethnicity and according to the horoscope, Taurus is his birth zodiac sign. Charles Edward Maurice Spencer is his full birth name.

Edward John Spencer and Frances Ruth Shand Kydd were his parents. They were also given the name, Viscount and Viscountess Althorp. He is the grandson of Albert Spencer (7th Earl Spencer).

He is the youngest child of his parents and was brought up with elder sisters named Sarah, Jane, and Diana. He had an infant brother, John who died within hours of his birth. He is styled as Viscount Althorp while his father styled Earl Spencer in 1975.

Charles Spencer served in NBC News from 1986 to 1995 as an on-air correspondent. On NBC Super Channel, he served as a writer and presenter for the documentary series, ‘Great Houses of the World’ from 1994 to 1995. From 1991 to 1993 he also reported for Granada Television.

As a critic, he wrote several review books for ‘The Guardian’ and ‘The Independent on Sunday’. His father died on 29 March 1992 while his mother, Diana died on 31 August 1997.

From the date of his father’s death, 29 March 1992 to 11 November, he became part of the House of Lords by inserting the peerage.

He wrote a series of books talking about the estate and his family history by creating the account of his ancestral home, Althorp: the Story of an English House published in 1998.

He introduced the Althorp Literary Festival in 2003  and served as a presenter for duo documentaries for ‘Blenheim: Battle for Europe’ that aired on History Channel.

The net worth of Charles Spencer is estimated to be around 150 million USD as of 2022. He has an annual income of about 10 Million USD.

Charles Spencer was alleged of denying his sister Diana to live in a cottage on the Althorp estate, though she was facing emotional hardships.

Though, these accusations were frequently considered untrue as the apology was published by the Times, stating that “having considered his sister’s safety, and in line with policy advice, the Earl showed the Princess of Wales a number of properties included Wormleighton Manor, the Spencer family’s original ancestral residence”.

There is no information about the body measurements of Charles Spencer including height and weight.

Moving towards his physical appearance, he has blonde colored hair and a pair of black eyes.

On May 26, 2022, he posted a picture informing his followers about his upcoming events starting with the motivation to raise the funds for Ukrainian via 24 hours of lectures.

His program started at 12:00 pm regarding Greenwich Mean Time (GMT) and at 11 pm regarding Australian Eastern Daylight Time (AEDT).