Who is Charley Indiana Dating?

Charley Indiana is currently single as she is not seeing anyone. She has not publicly confirmed her relationship status either if she is dating someone.

Her mother, Heather Lynn Hodgins Kidd is the third wife of her father, Bernie Taupin. They officially got married on 27 March 2004.

Together, they are parents to a daughter, Charley Indiana and Georgey Devon. 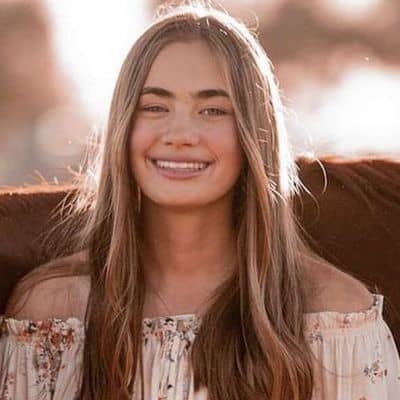 Who is Charley Indiana?

Charley Indiana was born in the United States on May 18th, 2005. Indiana is 17 years old as of 2022 and holds American nationality. She is of Caucasian ethnicity and has a Taurus birth zodiac sign.

She was born to her father, Bernie Taupin, and mother, Heather Lynn Hodgins Kidd. She has a younger sister named, Georgey Devon Taupin.

The celebrity daughter, Charley Indiana has not made her professional life apparent.

However, it is apparent that her father, Bernie Taupin has accumulated a successful career as an English lyricist, poet, and singer.

Talking about his profession, Bernie’s lyrics writing career officially kick-started in the late 60s by chance. Elton John was one of the talents in a major record company and he wanted to hire a lyricist. He somehow came across Bernie’s poems and out of many others, he liked them best.

Since then, Bernie has penned down several of Elton’s songs for almost four decades working together on thirty albums. There was also a time when Bernie and John worked with separate artists but somehow, they ended up coming back together time and again.

Both of them had worked occasionally during the 70s but the success of the above-mentioned albums formed a bond between the two. After the early 80s, Bernie started working as John’s primary lyricist. Some of the best songs that Bernie wrote for John are ‘Rocket Man’, ‘Crocodile Rock’, ‘The Bitch is Back, ‘Daniel’, ‘Sad Songs’, ‘Nikita’, ‘Don’t Let the Sun Go Down on Me’, and ‘Your Song’. Through John’s international and national fan following, Bernie slowly started to attain fame as well. Side by side, he kept writing personally and for other musicians as well.

It explained that Bernie wrote the lyrics separately and would hand it over to John. Without even consulting Bernie and changing the lyrics to fit the music, John simply recorded music on them. This was a very unusual process of working together, far away from the typical international standards.

However, in the later years of their collaborations, the working process had become much more cooperative. For some specific songs, Bernie started visiting the recording studios with John. Bernie wrote the lyrics for all the 11 songs in the musical.

In the same year, they celebrated 40 years of collaboration with the release of John’s album titled ‘The Captain and the Kid’. For the first time in his career, Bernie appeared on the album cover for the same. He worked with bands such as ‘Heart’ and ‘Starship’. From time to time, Bernie has also produced solo albums.  Further, in the 90s, Bernie released a poetry collection titled ‘The Devil at High Noon’.

As there is no info on her professional life in Charley Indiana, it is not possible to calculate her net worth at the moment.

On the other hand, the net worth of her father, Bernie Taupin is accumulated to be around 200 million USD according to the Celebrity Net Worth.

The daughter of a famous English writer is keeping herself away from scandals as well as rumors.

Charley Indiana is 5 feet 4 inches tall weighing around 55 Kg. Indian’s body measurements including, her bust, waist, and hips size are not available at the moment.

In addition, she has a fair skin tone along with blonde hair and brown eyes.

There is an unverified Instagram account under her name, which is enriched with more than 4.3K followers. Regarding her Instagram profile, she seems to be a cowgirl.