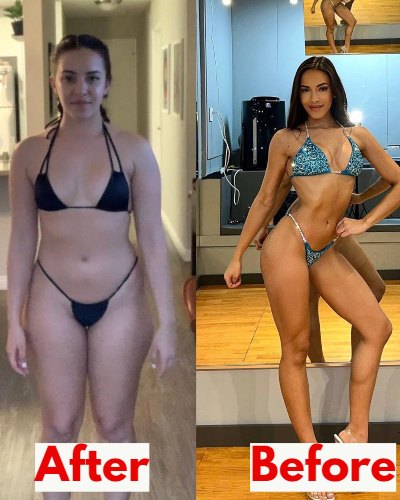 Charli Burnett fell into a deep depression and has gained over 45 pounds! The Vanderpump Rules star shared an unedited bikini photo of herself after the weight gain.

She shared the transformation by posting before and after pictures. The left picture is from her recent body while the right one is from her fitness days.

“I’ve been so reluctant to post anything about my journey with the fears of being judged, rude comments, or still not accomplishing my entire goals in time. But my friends convinced me I should start being more vulnerable & myself on the internet. Here we go!”

Burnett revealed that she lost everything at the beginning of 2020 including her career, independence, and herself. She fell into depression eating & drinking every single day and was literally at her rock bottom. She underwent surgery to help her foot but it took a toll on her mental and physical health.

“Through this journey I’ve learned so much about myself! I have a better relationship now with food more than ever, I’m confident with this new women I am, and I really learned I can do anything I set my mf mind too. So can you!!! This is a post to help motivate anyone who feels like they have no hope to keep going.”

Also read Nilsa Prowant Is Battling With PostPartum Depression After Giving Birth To Her Baby!

Who is Charli Burnett?

Charli Burnett is known as the cast member of the reality show Vanderpump Rules. She worked as a waitress previously and has participated in pageants. She owns an Etsy shop named CB Design.

Apart from reality shows, Charli is active on social media. She has an Instagram account with 41.6k followers. She posts mostly about swimwear. Other than that, she is also active in commercials and has worked in a few of them.

Also read Strictly Come Dancing contestant and acid attack survivor, Katie Piper shares about her depression and anxiety despite it been more than a decade after the acid attack!