However, there is a rumor that Charli is dating Chase Hudson, who is also a TikTok star known as lilhuddy. But, later she denied that rumor and she said her main priority is her career. 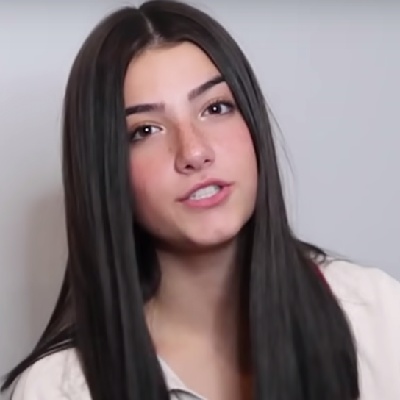 Who is Charli D’Amelio?

She is well known for her dance with original choreography, lip-syncs, comedy mimics, and entertaining talents.

Charli D’Amelio was born in Norwalk, Connecticut, United States, on May 1, 2004. Her birth sign is Taurus.

Her father, Marc D’Amelio and mother, Heidi D’Amelio is a very supportive person. They encourage her in every step of her career.

She has an older sister, Dixie D’Amelio, who is also a social media star.

She studied at King school, located at Newfield Avenue, Stamford. On March 24, she also competed in the Diva Dance Regional Dance Competition.

Charli has 16.5 m followers on TikTok account with id @charlidamelio and reached more than 650 million likes.

She became a TikTok sensation after posting her dance with original choreography and lip-syncs videos on TikTok.

Charli collaborated with her friends and other TikTok stars like Chase Hudson, Nick Austin, Thomas Petrou, and others, to make a video more interesting and wonderful. Therefore, every follower loved her work and want to see more videos from her.

She sometimes posts split-screen duet videos for her fans. One time, she did a split-screen duet with Mankell(@maakell) in the popular song in TikTok titled Suicidal -YNW Melly. Likewise, she is also a member of The Hype House, which is one of the collaborative TikTok group.

In December 2019, she collaborated with Ondreaz and Tony Lopez in the song No Idea by Don Toliver.

Charli has 619 k subscribers on her self-titled Youtube channel. She joined Youtube on November 22, 2015, and the channel has over millions of views. As of November 24, 2019, her first youtube video titled what happened at my meet & greet was released.

This video has over millions of videos. In this video, she met her fans and followers. She also makes TikTok videos with her fans. She said that day was an amazing day and an unforgettable moment of her entire life.

Charli’s net worth is approximately $1 million US.

Her estimated earning as a TikTok star is around $4.9 k the US per post.

Charli has dark brown eyes with black hair and shoe size is 8. Her height is 5 feet 7 inches and weight is 54 kg.

Charli has 3.9 million on Instagram and about 240 posts have already been published on her Instagram wall. She is following the personalities like Paris Hilton, Anastasia Karanikolaou, Betty White, and Cassandra Gracey.

Charli has around 149 k followers on Twitter. She joined Twitter in December 2012 and tweeted more than one hundred tweets.