Charlie Condou is a British actor, writer, and LGBT rights activist. He is married to Cameron Laux. The couple together has two children named Georgia and Hal.

Charlie Condou is openly gay. He is married to his long-term Canadian boyfriend Cameron Laux.

After 10 years of relationship, the duo tied the wedding knot on the 8th of June 2015. The couple together has two children named Georgia and Hal, who were conceived via IVF with family friend Catherine Kanter.

In 1998, Kanter and Condou met for the first time and made a mutual agreement between each other that they would have a child if she was still single at the age of forty. 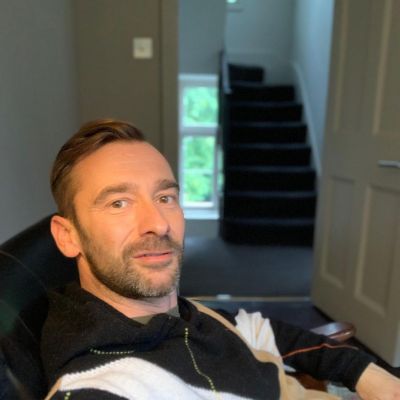 Who is Charlie Condou?

Charlie Condou is a British actor, writer, and LGBT rights activist. He is best known for his prominent role as sonographer Marcus Dent on the series Coronation Street.

Charlie was born on the 8th of January 1973, in Hammersmith, London, England. His full name is Charles Lomax David Condou.

The name of his father is Pierre Condou whereas his mother’s identity is still under review. Further, he is a very secretive person when it comes to his personal life. So, he hasn’t yet disclosed his siblings, early life, and academics details in the media.

Further, he holds British nationality whereas his ethnicity is still under review.

Charlie stepped into the acting industry in the year 1985 and made his television debut through the Ken Follett novel-based movie, The Jey to Rebecca. In the TV movie, he portrayed the role of Billy Vandam, a young son of the main character William, played by Cliff Robertson. That year, he also starred in another TV movie, Exploits at West Poley as Leonard.

Condou guest-starred on the ITV network television series, Robin of Sherwood as Martin. He made his big-screen debut through the 1988 film, To Kill a Priest where he was cast in the role of Mirek.

Aside from acting, Condou wrote a column for The Guardian newspaper on the subject of same-sex parenting from October 2011 until July 2012. He also wrote the introduction for Eric Rosseood’s book, Journey to Same-Sex Parenthood in 2016.

In 2013, Charlie create the company called Out With the Family and since then has been an advocate for LGBT families.  He has volunteered for the Terrence Higgins Trust and served as a patron for the charities Diversity Role Models and the akt.

In October 2012, Condou was named in the British gay publication, Attitude as the magazine’s “Man of the Year”. Similarly, he was listed at number fifteen in the 2012 World Pride Powers List.

The actor has managed to maintain a clean profile to date. He hasn’t been part of any sort of rumors and controversy that create a huge buzz in the media.

Charlie might have accumulated an impressive amount of fortune throughout his acting career. However, he hasn’t yet revealed his exact net worth, salary, and other earnings in the media.

Talking about Charlie’s physical appearance, he has a fair complexion. Likewise, he has a dark brown pair of eyes and light brown hair color.