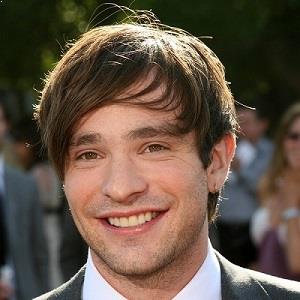 Daredevil's religion makes him unique. He's a vigilante, but he's also a lawyer - and all the while, he believes only God is capable of bringing people to justice.

One of the great things about playing a fallible superhero, one who doesn't necessarily have superpowers, is that the stakes are raised by the prospect of them perishing.

There's something very special about seeing history so clearly in front of you through that architecture that you just don't get in the U.S. If I was asked to choose where I'd most like to live, I would always choose London.

Charlie Cox is not married till now and he is not single at the present time. He is currently dating Agents of S.H.I.E.L.D. and Jessica Jones producer Samantha Thomas. The couple began dating each other at the end of 2015. Charlie recently became a father to his first child with his girlfriend Samantha. None of them have revealed anything about their plans for settling down. They are still together and there is no sign of separation at all.

Talking about his previous relationships, he dated the beautiful American actress Lynn Collins in 2004 when he was 22 years old. The couple was together for a year in 2004.

After few years of his breakup, Cox began dating another beautiful American actress Kate Mara in 2008. The couple began dating each other back in 2008 and their relationship ended with a separation in 2009.

After that breakup, Cox stayed single for almost five years and began dating the talented British Actress Janet Montgomery in 2014. Their relationship started at the beginning of 2014 and ended later that year. There is no record of his marriage until now. Currently, he resides in London with his girlfriend Samantha Thomas.

Who is Charlie Cox?


Charlie was born on 15 December 1982, in England, United Kingdom. His birth name is Charlie Thomas Cox. Cox is of British nationality and mixed (English, Irish, and Scottish ethnicity).

He is the youngest of five children of Patricia C. A. Tricia(mother) and Andrew Frederick Seaforth Cox(father). He has a brother named Toby and three half-siblings from his father’s first marriage.

He was educated at Ashdown House School in the village of Forest Row located in East Sussex, London. Later he Sherborne School in Dorset. Later, he enrolled at Bristol Old Vic Theatre School in Bristol to study acting.

Charlie began his acting career playing Young Vicar in an episode of the television film Judge John Deed. He made his big screen debut playing the role of Theo in the2003 thriller movie dots the i. After a year, he appeared as Lorenzo in The Merchant of Venice. His big break came up in 2007 with a role in the movie Stardust, in which he played Tristan Thorn.

Charlie Cox: Salary and Net Worth

Talking about the rumors and controversy, there was a rumor that he will not play the role of blind man on the Netflix series Daredevil but it just came out to be a rumor.

Talking about his body measurements, he has a good height of 5 Feet and 10 Inches (1.78m) with body weight 78 kg. His chest size is 42 inches, his waist size is 34 inches and biceps size is 16 inches. His shoe size is 10(US). He has light brown hair color and his eyes are also light brown.