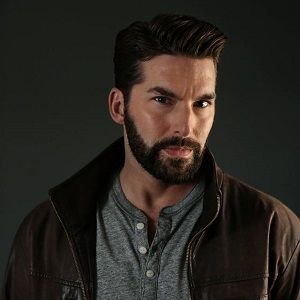 I always like to start with a great pair of shoes. It's your first contact with the ground, and it can really change the way you move and act physically.

I think the first table read I ever did, my hand was vibrating the whole time.

The 37-year-old Canadian actor and producer, Charlie David is an unmarried man. He is a gay and is currently dating with Patrick Ware. Currently, they both are living in Montreal.

Besides this, there was also rumor regarding his relationship with Luke Macfarlane and Brandon Kneefel. Apart from him, he has never been spotted with any other man in the public and media. As of now, Charlie and Patrick are enjoying their love life and living elegantly.

Who is Charlie David?

Charlie David is a Canadian actor, director, and producer. He rose to prominence after appearing as Toby in the LGBT horror series Dante’s Cove. Furthermore, he has also served as a TV host for a couple of shows such as F.Y.E!, SpyTV, Bump! and Crash Test Mommy.

Charlie was born on August 9, 1980, in Regina, Saskatchewan, Canada. Talking about his nationality, he is Canadian and his ethnicity is Polish. There is not any information regarding his and family background. As a child, he developed his interest in music.

Concerning in his education, he completed his graduation from the Canadian College of Performing Arts in Victoria, British Columbia.

Charlie David began his acting career from the 2002 film Holy Terror on which he played the role of David. In the same year, he also appeared as St. James in a television series Time Machine: St. Peter – The Rock. In 2005, he landed three roles in which he featured in Reefer Madness: The Movie Musical, Playing the Role, and Terminal City.

In addition, he is also the co-owner of Border2Border Entertainment along with Derek James and Linda Carter. Back in 2005, he was named by Out Magazine as one of the “Out 100” for Remarkable Contributions to Gay Culture.

Being a famous actor and producer, he pockets a handsome amount of money from his profession. However, his salary and net worth are unknown.

As of now, he has not won any awards in his career. Although, he was named by Out Magazine as one of the “Out 100” for Remarkable Contributions to Gay Culture in 2005.

So far, there are not any drastic rumors regarding his personal and professional life. Moreover, he has never faced any controversy in his career to date. As he has full focus on his career, Charlie has never been involved in any controversial stuff.

Charlie David has a height of 5 feet 10 inches and his weight is unknown. Moreover, he has a pair of brown eyes and brown hair. Besides this, there is not any information regarding his other body measurements.