Charlie Day is an MTV Movie & TV Award-nominated actor, producer. Charlie is married and has one kid. 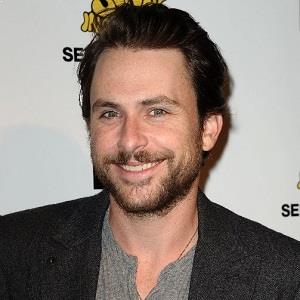 I have always had a half-baked philosophy that having a Plan B can muddy up your Plan A.

Like most young actors starting out, I really just wanted to act. Whether you find yourself stumbling into a drama or a comedy, you're going to jump on whatever you can. I started out doing plays. When I moved to New York, I was as enthusiastic about the possibility of doing what Im doing now as I was about the possibility of becoming Al Pacino or something.

As an actor, sometimes you feel a pressure to change yourself from time to time.

You catch yourself acting with these people that you've watched and loved in movies for years, and you feel truly blessed to be in that position.

Charlie Day is a married man. He has been married to actress Mary Elizabeth Ellis since March 4, 2006.

Who is Charlie Day?

Charlie Day is an American actor, screenwriter, producer, comedian, and musician. He plays Charlie Kelly on ‘It’s Always Sunny in Philadelphia’. Additionally, he has also appeared in movies ‘Horrible Bosses’ and its 2014 sequel.

Charlie Day was born in New York City, New York on February 9, 1976, to parents Mary, who was a piano teacher at The Pennfield School in Portsmouth, Rhode Island, and Dr. Thomas Charles Day, a retired professor of music history at Salve Regina University in Newport, Rhode Island.

He is of Mixed (Italian, Irish, English, Welsh, French, and Scottish) ancestry.

Throughout most of his childhood years, he grew up in Middletown, Rhode Island. He is of American nationality. Furthermore, he belongs to a mixed ethnic background of Italian, Irish, English, along with remote Welsh, French, and Scottish.

Talking about his education, Day graduated attended Pennfield School and graduated from the Portsmouth Abbey School, both in Portsmouth, Rhode Island. Later, he received a bachelor’s degree from Merrimack College in North Andover, Massachusetts. Furthermore, in 2014, he received an honorary doctorate in performing arts from Merrimack.

Charlie Day initially was active in the training programs at the Williamstown Theatre Festival in Williamstown, Massachusetts. He first appeared in the TV movie ‘Mary and Rhoda’ in 2000.

In the same year, he also appeared in ‘Celebrity Deathmatch’ and ‘Madigan Men’. In 2001, he appeared in ‘Law & Order’ as Jeremy. All in all, he has more than 30 credits as an actor.

Some other movies and television series that Day has appeared in are ‘The Cool Kids’, ‘I Love You, Daddy’, ‘Fist Fight’, ‘The LEGO Movie 4D: A New Adventure’, ‘The Hollars’, ‘Vacation’, ‘Horrible Bosses 2’, ‘Drunk History’, ‘The Lego Movie’, ‘Pacific Rim’, ‘American Dad!’, ‘Unsupervised’, ‘Going the Distance’, ‘A Quiet Little Marriage’ and ‘Third Watch’ among others.

Additionally, he has also been a producer for the television shows ‘How to Be a Gentleman’ and ‘Unsupervised’. Day hosted the November 5, 2011, episode of ‘SNL’.

Day has an estimated net worth of around $30 million according to the sources. In the series Always Sunny, he charged $10K per episode.

Day’s show ‘It’s Always Sunny in Philadelphia’ has received numerous controversies over the years. Furthermore, the movie he appeared in, ‘I Love You, Daddy’ was also criticized by many. At present, there are no rumors concerning Day’s life and career.

Talking about his body measurement, Day has a height of 5 feet 6½ inches (1.69 m). Additionally, he weighs around 65 kg or 143 pounds. Furthermore, his hair color is dark brown and his eye color is green.

Modern-day Romeo and Juliet: Michele D’Alpaos and Paola Agnelli start romance across their balconies in Verona and are now engaged!